Since Model Rail issue 212 appeared in July, a number of readers have been in contact asking for the plans for the track layout of my modern diesel depot. As this layout-cum-diorama was built more or less off the top of my head, I wasn't sufficiently organised to draw up any proper plans, so an assortment of images will have to suffice.

The baseboard measures exactly 4ftx2ft and the Peco Code75 track enters the scene from a twin track fiddleyard, fanning out to five sidings via two short radius and one long radius points. The two small points are Peco left- and right-hand units, while the larger left-hand turnout was hand-built from a DCC Concepts Legacy kit (see MR206). Spreading the lines out at various angles and staggering the turnouts adds depth to the scene, as well as creating a more organic appearance. It can be tempting to have everything straight and parallel but such an approach, while probably more prototypical, tends to make a layout appear cluttered and lifeless.

As the above image shows, the right hand end of the baseboard has yet to be completed in terms of scenery. My initial idea of a tunnel and hill has fallen by the wayside and I'm now planning for the tracks to disappear beneath a modern concrete road bridge, which will better suit the period and urban setting.

I hope these images prove useful to those inspired by my layout... 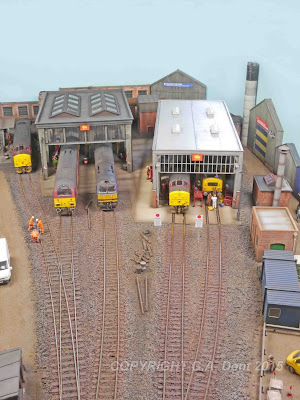