This little diorama has been knocked together in super-quick time, using buildings salvaged from a dismantled diesel depot layout. With the Hornby MPD building as the centrepiece, it's destined to be a photographic backdrop. The MPD is also about to act as a testbed for some impressive new 3D printed working floodlights, so there'll be some electrical work to do next.

Incidentally, the concrete groundwork has been formed from mounting card (Daler), built up in two layers in order to achieve the correct height in relation to the rails. I didn't bother adding strips in the '4ft' between the rails as this open structure is more of a light servicing shed than a proper maintenance depot. I was also running low on card, so it would've been touch and go whether there was enough. Indeed, this proved a handy way of using up some off-cuts, so it's felt like a full-on recycling job. Even the baseboard timber has been built from scrap material, which has dictated the overall size of the diorama.

My usual technique of replicating concrete groundwork is to rule out the individual sections with a pencil, ensuring that the lines aren't too straight. At the corners, they get particularly wobbly. An airbrush is then employed to create the finish, with highlights and shadows created from different shades of grey, with dirty browns mixed in.

I can tell that I've rushed this time, as the shading is a bit heavy-handed. However, it doesn't look as bad when viewed from the usual angle (rather than from above), so it'll suffice. Must get on with fitting those lights now.... 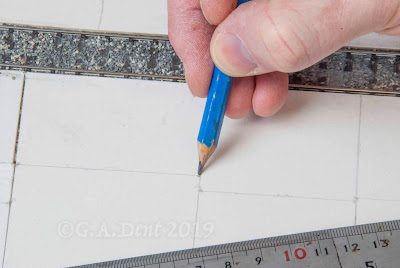 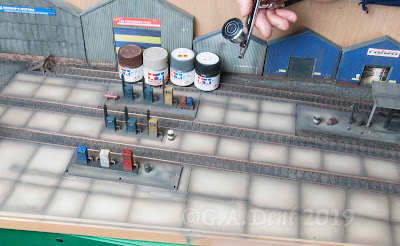