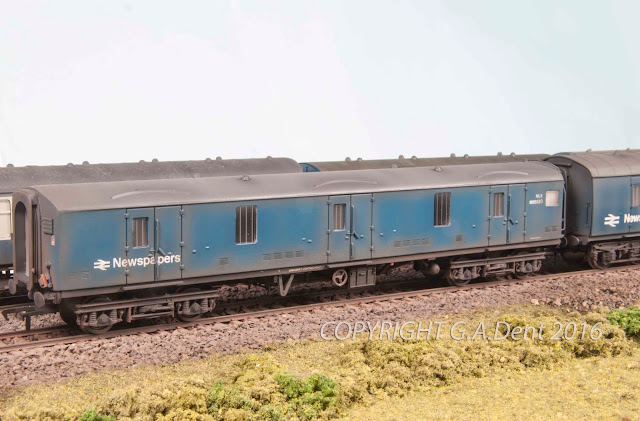 Look closely and you'll note that the flat ends have been replaced with a bow profile, complete with gangways and vents. The small frosted window at the far end suggests that a WC compartment has also been installed. A good number of standard GUVs were thus converted in the early 1980s for use in newspaper trains, where the gangways allowed for sorting en route, with bundles of papers dropped off at intermediate stations for onward transport to newsagents.

Using a Bachmann Mk1 GUV as a base, the conversion project proved great fun - so much so that I'm planning on repeating the trick on at least two more vehicles. When, though, is anyone's guess! I'm particularly pleased with the paint job, with there being about eight slightly different shades of blue applied. It's very subtle, and the photo doesn't really show it off to full effect, but in the flesh, it looks very convincing - typical '80s era patina. And just how I remember seeing them.
Labels: Bachmann BR BR blue coach detailing Mk1 modelling OO scratch-build weathering