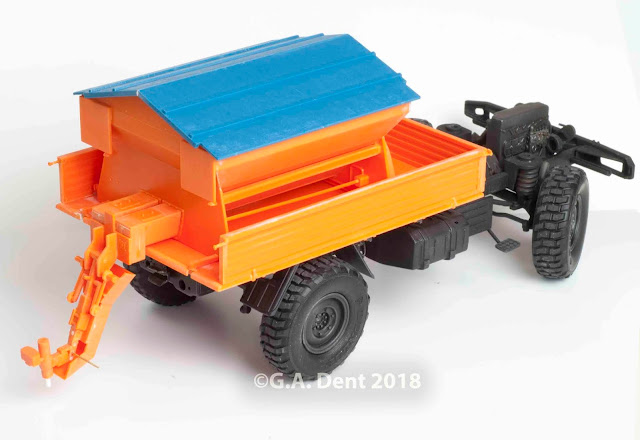 As explained in previous posts, I've been building a Revell 1:24 scale Mercedes Unimog over the past few months. Work ground to a halt for a while, due to holidays and work commitments. But, the bodywork is now starting to take shape, with the cab painted and ready for glazing and the rear load deck and gritting hopper assembled.

I'm not a fan of orange at the best of times - along with yellow, I find that it's one of the worst colours to paint - but I had a particularly challenging time getting the shade correct on the cab. In fact, it took three or four attempts before I was happy with it, settling on Tamiya's acrylic orange, lightened with a little white.

Next jobs, to tidy up the grit hopper ready for priming and painting, then adding the decals. The snowplough also needs a little extra work and I've realised that my kit lacks any glazing for the two rear windows in the cab, so they'll need fabricating from clear styrene. Due to the complex nature of the bodywork, I'm thinking that weathering each section before final assembly will be necessary, but that's probably a few weeks off yet...