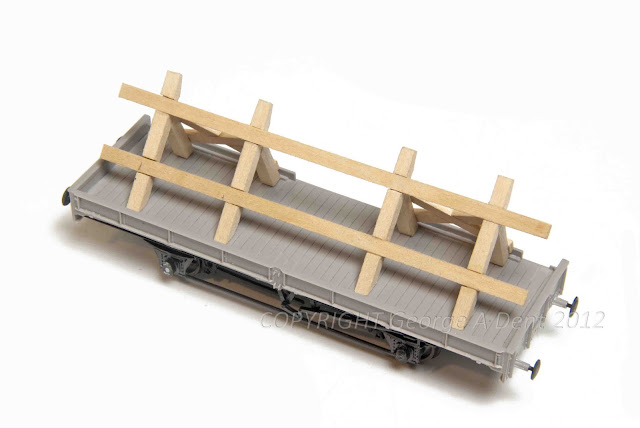 With a beer in hand (a bottle of Dent Brewery's Golden Fleece - very nice) and the Liverpool match on the radio, last night was spent building a OO Parkside Dundas BR Trestle wagon. Very similar to an LMS design, the kit's OK as far as detail is concerned although, being an older moulding, there's quite a bit of flash to remove from the various components before assembly can begin.

What I found most at fault was the plastic trestle sections which are very... well... plasticky. There's no wood grain effect and it would take some skilful painting to get them to look right. So I haven't bothered and have made use of some strip boxwood and have used the plastic bits as a pattern from which to cut each component. Now the glue has dried, it can be stained with wood dye. I also need to add some steel strengthening brackets (from brass or thin Plastikard), which sounds like a nice job for the weekend.
Labels: BR brass detailing kit building LMS OO Parkside plastic wagons wood