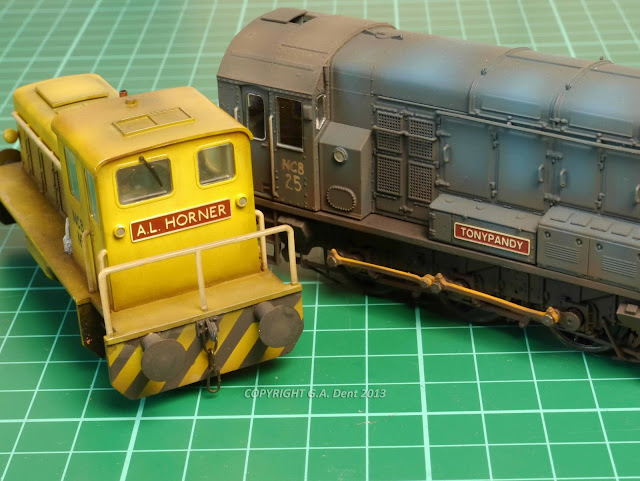 I recently commissioned Peter Harvey to etch me a set of brass nameplates for my fictional National Coal Board traction fleet. As my Maudetown Colliery layout is (loosely) set in the South Wales valleys, I opted for a range of names of people and places closely associated with the Welsh mining industry and, especially, the trade union movement.

Illustrated above is a Knightwing 0-4-0, formerly christened Imperial, but now carrying the name A.L. Horner, after the famous union leader of the 1930s and 40s. Meanwhile, the ex-BR Class 08 carries Tonypandy 'plates in honour of the Tonypandy 'riots' of 1910, following a labour dispute at a number of mines in the Rhondda area.

It's a little subversive of me to name a pair of locomotives owned by the NCB (a formerly state-owned entity) after an ardent socialist and a famous strike. But, my layout intends to portray a small colliery still producing coal through the 1990s and early 2000s, so it would have taken a dedicated left-wing government to have avoided the wholesale pit closures of the 1980s. Therefore, Maudetown Colliery exists in a parallel universe where Thatcher never existed.

Well, the layout's named after my cat, so it was never going to be wholly realistic, was it?!