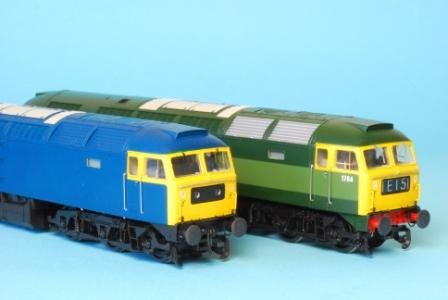 Without a hint of nostalgia-influenced sentiment, I was always excited to see a Class 47 when I was a young ‘spotter’. The ubiquity of the ‘47s’ put a lot of enthusiasts off them in the ‘70s and ‘80s but, living beside a virtually DMU-only line in my formative years, ANY loco sightings were a cause for celebration.


I can just remember jaunts up the Dock Road in Liverpool and seeing the odd blue ‘Duff’ haul a rake of MGR hoppers or Freightliner services across the un-gated crossings, preceded by a scruffy BR man with a filthy red flag. My Uncle’s blue Mk1 Escort would be idling impatiently - with the ever-present stench of petrol lingering around the back seat - as the train plodded noisily past the end of the bonnet.

Big days out to Lime Street or, better still, Warrington to spend the day on Bank Quay’s platforms, or a trip on a bone shaker EMU to Crewe would leave me in heaven as lots of blue diesels and electrics scuttled around. A ‘47’ was just as good a cop as a ‘37’, ‘25’ or a pair of ‘20s’. Mind you, a Forty was a different matter! It was the ‘86/4s’ and ‘87s’ that used to bore me. I’d seen them all within a couple of weeks.

But I digress. Part Two of Model Rail’s revisit of the Class 47 Masterclass appears in the current issue (MR139) and concentrates on the 1973-85 period. What we can loosely term the 'Rail Blue period' offered me a few possibilities for modelling subjects to compliment the article. Most obvious was the need for a blue loco, but there was also a need for something a bit more interesting.

Killing time in Liverpool recently, I mooched into Central Library and looked through a couple of ‘47’-themed books. And lo, 47373 jumped out from the pages, complete with flashing rooftop light, a la an old fashioned police car. Maybe the author was so taken with the idea of a Duff acting like an extra in the Professionals, because the light was described as having a flashing blue beam. In reality, it was amber.

But, no matter, my model of 47373 was never going to have a flashing light. Reason 1: I find flashing lights a bit vulgar and... Reason 2: I’m not an electronic sort of chap. I’m sure it’s possible, however, although the light would have to be very small. Maybe fibre optics and a flashing LED would do the trick? Is there anyone out there willing to try it, I wonder....


A small band of Duffs lasted in the tasteful two-tone green scheme until the late summer of 1976, albeit in a pretty shabby version of it. I had intended to do a second ‘47’ in the original Railfreight scheme, as 47280 Pedigree, no less, but that will have to wait for another day (perhaps using a ViTrains ‘47’). What made me change my mind? It was thrift.


At around £40 each, both of these Bachmann Duffs were obtained from Hatton's of Liverpool a couple of months apart. That’s roughly the RRP of a single ViTrains ’47’. Now, I’m not going into which I think is the better model, but I was brought up not to argue with economic fact.

Although the green loco was never meant to be a Model Rail project, I thought it would add a bit of extra colour to the piece, where I demonstrate how to replicate that truly awful exterior condition, while keeping the yellow ends fairly spotless!

Check out Model Rail to see the feature in full, although there are a few ‘spare’ images here to give an idea of what work was involved. The blue machine has a new set of Shawplan roof fan grilles, which are superb. Until I stuck my lumbering fingers straight through the delicate mesh just before photographing the models. Now they’re spoilt by blobs of superglue holding them in place. So, if anyone’s thinking of fitting this upgrade pack, keep those fingers away from the grilles once they’re fitted! 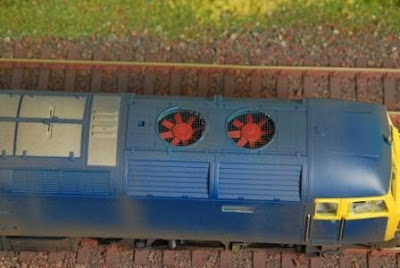 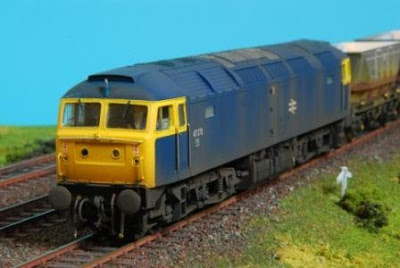 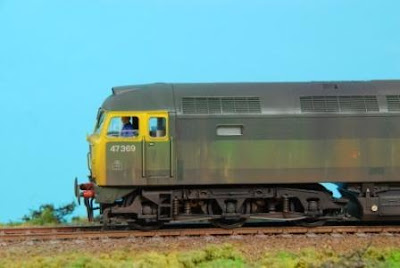 I hope readers enjoy the '47' feature in the mag, which is due out today. As an added bonus, here's some extra info on my two chosen prototypes.

47373
Originally numbered D1892, this Brush-built Class 47 entered traffic on August 6 1965. Renumbering into the TOPS sequence, as 47373, took place in 1974.
One of two ‘47's specially equipped for working within power stations on MGR duties, a flashing amber rooftop light was fitted above each cab, along with remote control and slow-speed equipment. 47277 was the other ‘47’ so fitted, although Class 56 56074 also received a similar light.


Delivered new to Tinsley shed, it then moved to Knottingley in 1967 where it stayed until 1979. Transfer to Healey Mills took place in 1979, before a return to Tinsley five years later. After serving the South Yorkshire coalfields for over 20 years, 1987 saw the Lincolnshire port of Immingham became ‘373’s home as the machine became part of the Railfreight Petroleum pool of locomotives. Here it stayed until storage and eventual withdrawal in 1992. The end came at MC Metals, Glasgow, in November 1994.
Although never fitted with a boiler, it retained its water tanks until the early 1980s. 47373 also kept the distinctive cab roof lights, although once these had been rendered obsolete, only the glass tops were removed, the bases being left in place. These remained until around 1990 (through an application of early ‘red stripe’ Railfreight livery), finally being removed to accommodate rooftop radio aerials about the same time as a repaint into the three-tone Railfreight grey scheme, with Petroleum Sector markings.

47369
Built as D1888 in July 1965, this machine went first to Tinsley, but spent most the following two decades working freight around the Nottinghamshire area, before transfer to Crewe in 1985. One of the last half-dozen ‘47s’ to remain in BR green, 47369 finally succumbed to Rail Blue in the autumn of 1977 when it was despatched to Crewe for a major overhaul. The blue scheme was retained until the late 1980s when triple-grey Railfreight livery was applied, with petroleum sector markings.
Another freight-dedicated locomotive, 47369 also never received a train heating boiler although the side filler hatch and under-slung water tanks remained in place until the late 1970s and 1980s, respectively. Fitted with slow speed control, this was another ‘47’ that spent long periods working MGR coal trains around the Midlands. Withdrawal came in 1996 and the locomotive became history after cutting-up for scrap two years later.
Source: http://www.class47.co.uk/
Labels: Bachmann BR BR blue Class 47 detailing diesel green Liverpool loco OO scratch-build Shawplan weathering