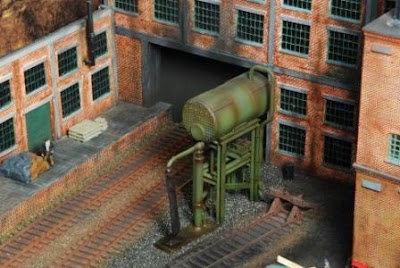 Looking at home in the industrial confines of Maudetown Colliery, the new gravity-fed water column and tank are in place to serve the NCB's small fleet of steam engines.

The new water tank and loco filling apparatus are now in place on my Maudetown Colliery layout, serving the small loco servicing spur on the outside of the NCB installation. I’ve been planning the extension baseboard, with measured drawings underway and a shopping list has been drafted for track, points and scenic items.

A chat with the guys from Ten Commandments at the Warley show has led to an offer of more of their low-relief brick industrial buildings, including some new additions to the range, which will be exciting. I should be picking those up at the Glasgow show in February, so that’ll give me time to get the baseboard built. The wagon fleet has also swelled considerably since the first baseboard was completed in 2009 and I’ve a few NCB-branded road vehicles to complete too (see earlier posts). 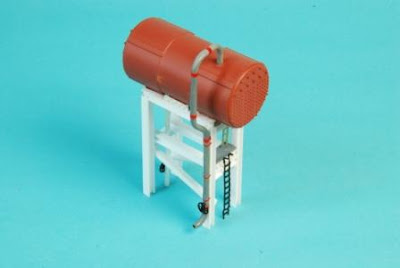 Assembled from cheap and recycled bits and bobs, the tank and its stand proved to be an enjoyable way of passing a few evenings. 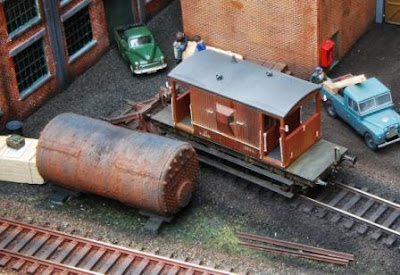 What used to be: This is how the layout looked originally, with a Bachmann boiler sat derelict, waiting for a new lease of life. That boiler did go on to pastures new (see post re. Illinois show dioramas), but as you can get a pair of these for a few quid, the other one was pressed into use as a water tank. 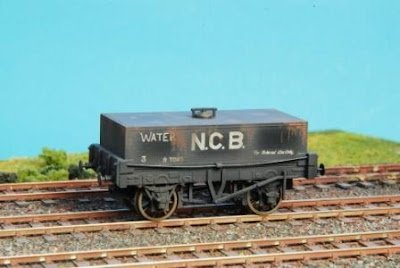 As Maudetown Colliery is set atop a hill in a location similar to the South Wales Valleys, there had to be a way of ensuring a good, clean water supply for the motive power. So, I've repainted a couple of Dapol tank wagons to be NCB water carriers. Inspired by the Cromford & High Peak Rly, I'm also looking through my junk boxes for a spare loco tender to treat similarly... it's all fictional but it's good fun.


However, the layout’s namesake – Maude the cat – sadly passed away last week, so the layout has taken on a somewhat sorrow-tinged status. It was, after all, one of her favourite places to snooze when we were working together in the shed. In fact, so many of my everyday tasks are much duller without her, as she was involved in so many of my projects, whether I liked it or not.

But, little Maude lives on in my memories and in the form of a model railway that is set to grow, perhaps even further than I’d ever envisaged... 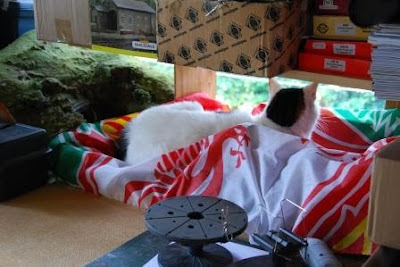 The Empress of Maudetown. After discovering my late feline assistant stretched out between the pumping house and engineering stores, I thought it best to drape my LFC flag over the model (with a little bubble wrap beneath) to preserve some of the details. Despite it becoming a somewhat unexpected sleeping place, she never once broke anything - a true model-maker. She was always suspicious about what may be lurking in the tunnel, however. 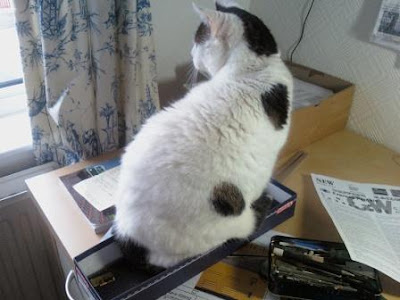 Speaking of which, the sponge-lined boxes of ViTrains Class 37s were a particular favourite with Maude - she had her own unique ideas about comfort. 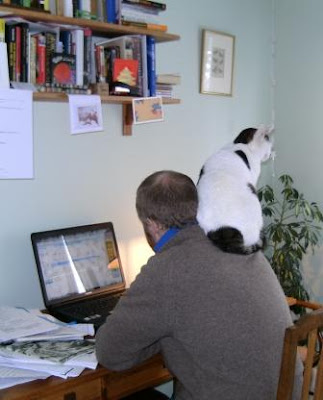 Even updating this Blog will never be the same now, as she always helped in some way, whether in terms of 'editing' my text or simply keeping my shoulders warm... 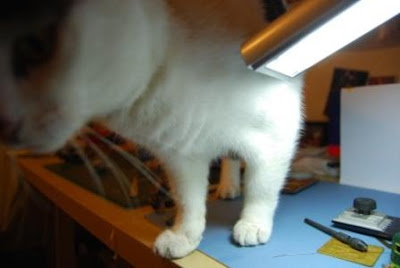 ... and she was a dab hand at pressing the self-timer button on my camera. What will I do without her expertise?
Labels: buildings Dapol industrial layout lineside Maude Maudetown NCB planning plaster scratch-build Steam tanks wagons