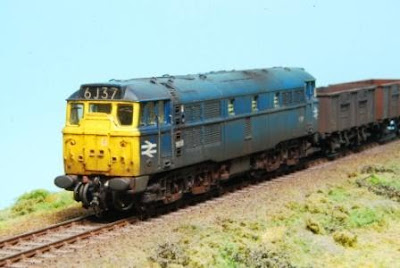 Curiously, three different Model Rail readers have sent in requests for information regarding the humble Class 31. To illustrate one of my replies, I dug out this old timer from my collection. I bought this Lima 31 on my 15th birthday (July 1990) from Hattons and I can remember the day clearly, not least as we ended up in a nasty car crash on the way home. Luckily, this model emerged completely unscathed despite being thrown around a fair bit, so it's become something of a lucky charm.

It has been detailed and repainted a number of times, starting out in Railfreight red stripe livery and named Phillips Imperial. Its current guise is as a typical early-1970s Type 2 and numbered D5658. The most recent detailing upgrade was covered in the May 2005 issue of Model Rail (No.79), which included the back-dating of the bodywork, given that the donor model featured later modifications, such as the sealing-up of the boiler access and removal of the raised waist strip. Re-instating all of these details proved time-consuming, although a comprehensive detail kit (I think it was from Craftsman Models) helped.

The old Lima mechanism still runs pretty well, despite its age and it doesn't look too bad either. However, I can tell that it was painted with an aerosol and that the weathering was applied via a naff airbrush and compressor - the finish is a bit coarse in places and I could do the job so much better now.

The point of this is that I'd been wondering about the possibilities that Hornby's imminent re-release of the ex-Lima 31 into the Railroad range. Many people rate the Lima bodyshell above the Hornby model. Therefore, with a better motor, the Railroad product may well find its way into the hands of avid detailers. I'm definitely planning on having a go...
Labels: BR BR blue Class 31 detailing diesel Hattons Hornby Lima Liverpool loco Model Rail OO Railfreight