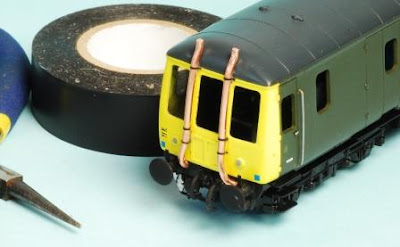 A while back, I posted some images of an old single car Lima DMU conversion I’d un-earthed from the attic. As the conversion work was carried out when I was a teenager, it was a little rough around the edges. So, a bath in Superstrip was in order, but this predictably resulted in the breakdown of the glue joints, leaving me with a kit of parts. Not a problem, just an opportunity for another interesting project.

Having recently come across an image of an olive green departmental ‘bubble car’, I fancied having a go at recreating this prototype. Now, I could have just used a Hornby Cl121 single car unit, but it seemed a waste of this 1980s vintage Lima bodyshell and Craftsman Models conversion kit. So, the dye was cast and a protracted project ensued. 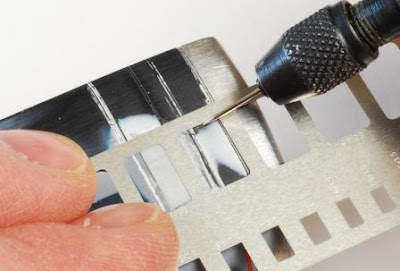 One aspect of the original conversion that had to be addressed was the fact that the former gangway end of the single car that had been turned into a second cab had the door and window cut into the wrong place. Much filling and sanding ensued before a sharp pin in a pin vice and some fabulous etched scribing guides from Lion Roar allowed for a quick re-scribe of the window and door frame. Available in various shapes and sizes, these guides are aimed at military and aviation modellers but they’re equally helpful to us railway buffs.

Along with the removal of the destination boxes at each end, new exhaust pipes were needed. In keeping with the ‘budget’ nature of this conversion, I made use of some single core copper wire (salvaged from off-cuts of some ‘twin & earth’ cable left over from rewiring my shed), with brackets cut from electrician’s tape.

At the moment, the model is waiting patiently for its turn in the weathering queue, followed by glazing and assembly, using a chassis from a Hornby Class 121. I’d also like a set of Ultrascale wheels in due course. A full demo of the detailing work will appear in Model Rail later in the year, whilst the painting of it will feature in the forthcoming Model Rail DVD... stay tuned for more info... 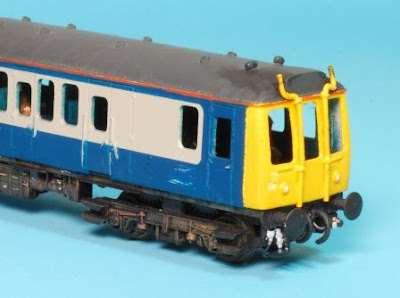 It must have been the late 1980s when this conversion was carried out. Many years later, the model still has a use, although a replacement motor will be needed.
Labels: Class 121 detailing DMU DVD Hornby Lima Model Rail OO painting scratch-build