Three different Class 37s in progress, each with a contemporary relevance. 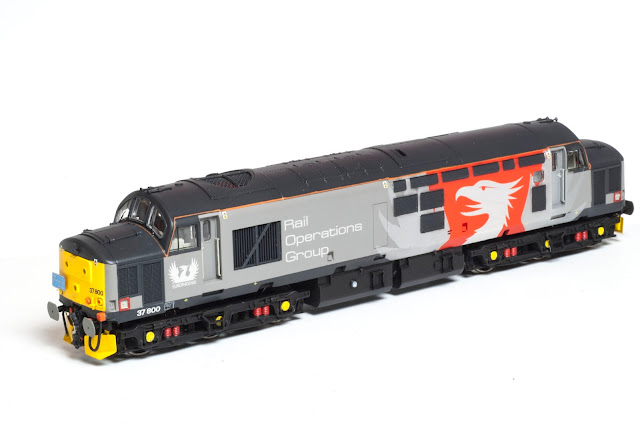 A triumvirate of English Electric Type 3s has been taking up most of my time and energies over the past couple of weeks, each posing particular challenges. The most demanding has been 37800 in the striking Europhoenix scheme, that has required the mixing-up of appropriate paint shades, creating stencils for painting the phoenix's wings and a few physical modifications to the bodywork to mirror the real thing.

A set of lovely transfers from Precision Labels eased the job, with the mythical bird's head and all logos being provided on one sheet of waterslide decals. The same source also provided a set of 3D-printed Dellner pivoting couplings.

Another '37' in the news has been 37424, recently named and re-numbered in honour of the last airworthy Avro Vulcan jet bomber. This is the first large logo blue '37' I've painted in a long time, the scheme being a staple of my youthful endeavours back in the 1980s. Somehow, I managed to mess up the masking of the black window surrounds and had to re-do them - should have paid more attention! Once I've sorted out the masking, this model will be receiving a set of the great new three-dimensional transfers from Railtec - watch this space...