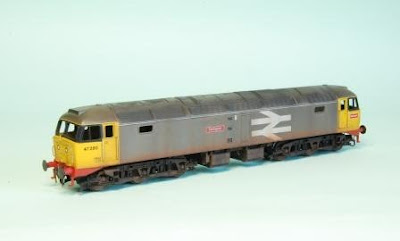 Some progress has been made on my Vi-Trains/Lima Class 47 hybrid, with final detail painting, varnishing and basic weathering out of the way. What remains now is glazing, adding cab interiors and final reassembly before some extra bits of weathering. Talking of which, I’ve a set of the wonderful etched windscreen masking templates from PH Designs for the Class 47. These help create the distinctive sweep of the prototype’s wipers over a fly- and dirt-spattered windscreen. See MR155 for a review of these templates. 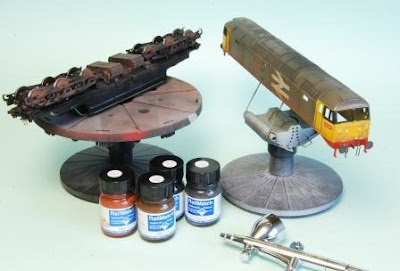 47280 is being depicted a little dirtier than I’d initially envisaged, following a bit of a cock-up in the varnishing stage. Well, a few cock-ups in fact. The first coat didn’t take at all after I forgot to give the body a thorough clean/degrease beforehand. Plus, I’d put the nameplates in the wrong place (secured with the varnish). After laborious rubbing down to prevent the paint being disturbed, I tried again but this time using some pre-thinned Humbrol SatinCote left over from another project. However, this mix had been sitting around for a few days and, although kept in a lidded container, it had gone decidedly off.

It really was one of those moments when you know you should have known better, but by then it’s too late. Although it looked fine during the application, after an hour or so it started to ‘pickle’, leaving a very rough, slightly misty surface; Duh! So, more abrading but this time the overall finish started to suffer and it showed through the third clear coat and, thus, a few dirty streaks here and there, plus the odd scratch and rust patch have covered a multitude of sins.

One thing that I need to resolve is the incorrect fuel/water tank arrangement between the bogies. My replacement Vi-Trains chassis portrays the twin banks of battery boxes, but 47280 Pedigree ran with an original-style set of boiler tanks into the 1990s. I’m sure that I’ve got a set of spare Heljan tanks somewhere... but exactly where I’m not sure...

This has been a long, drawn-out project and I’ll certainly be glad when it’s finally signed off. 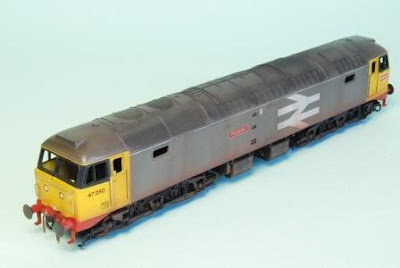 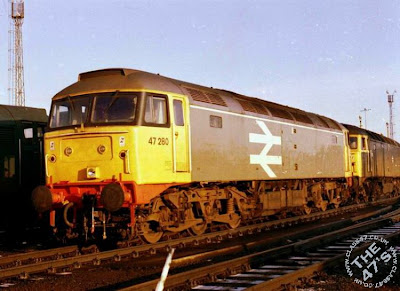