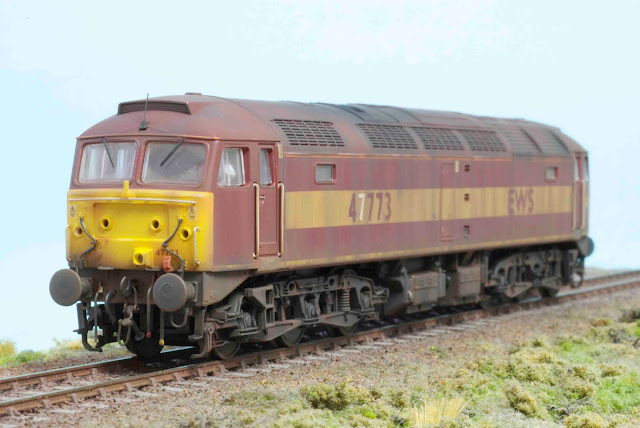 While waiting for the paint to dry on the Class 37 project, I managed to add a few final touches to a ViTrains Class 47/7 that had been on my workbench for the past few months. Looking like a toy when first taken from the packaging, some distressing and weathering work, plus a little detailing, has produced a more authentic model. It's still not 100% ready yet - just a few tweaks are needed, including adding some Shawplan Laser Glazing.

When this '47' first came my way, I was tempted to strip it down and repaint it into something completely different. However, after a little more thought, I’d wondered about recreating an EWS '47' in its twilight years – which is how I remember them. Having had a break from railways in the late 1990s, I got back into watching real trains when I moved to York to work at the NRM. Many a free hour would be spent hanging around York station and I even went so far as to get myself a Platform 5 ‘ABC’ and started taking loco numbers again.
By this time, though, 'Voyagers', '66s' and '67s' were starting to take over and my enthusiasm for ‘spotting’ began to wane again, especially as the Virgin & RES '47s' became like hen’s teeth. After that, I can only remember EWS '47s' looking pretty knackered and out of use in places like Warrington Arpley and Crewe.
With this in mind, I thought I’d have a go at distressing and de-naming this '47' to suggest a ‘Brush 4’ living on borrowed time. Besides, it’ll give my shed layout a bit of variety when running as an EWS depot. These images give an idea as to how this project has progressed; look out for a full demo of the weathering and distressing techniques in Model Rail. 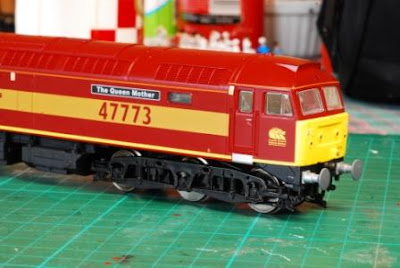 Is it a toy or a scale model? Straight from the box, the model screams "Hey, I'm PLASTIC!". But the ViTrains model does have great potential, especially as Hattons are selling some of them for under £40 at the mo. 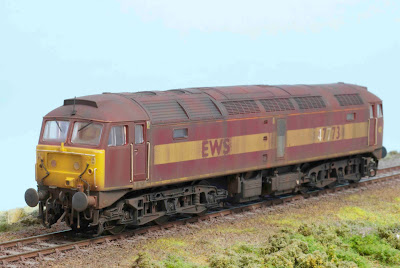 After treating with abrasives and solvents of varying description, a few embellishments were added, such as a replacement engine room access door in grey and a few TOPS number vinyls having peeled away to reveal white backing, as has been seen on a few EWS locos down the years. The Queen Mum nameplates had to go too - not for any political reasons, mind you... 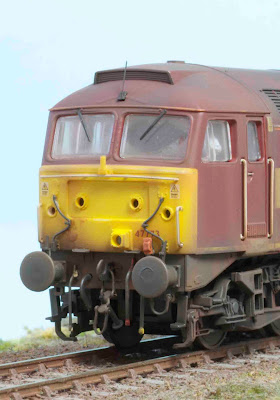 The dodgy glazing has to go. A pack of Shawplan Laser Glazing is on my shopping list, which will be the icing on the cake for this model. As a platform for detailing and modification, the ViTrains model gets my vote over the competition. Especially at the bargain prices some retailers are offering on certain liveries; it pays to shop around.
Labels: Class 47 Crewe detailing diesel EWS loco Model Rail OO Shawplan Vi-Trains weathering