The steam locomotive that dare not speak its name.. 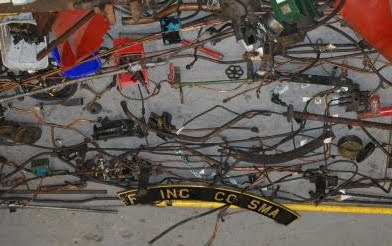 Captured in the NRM's workshops back in February 2011, a national icon resembled a full-size kit.

Akin to one of those challenging brass loco kits that sits in a box on a shelf, only coming out now and again for more hours of hair-pulling and cursing, one of our national treasures has been in the news again recently. Although much of the ins-and-outs of the saga have passed me by, the story has recently been on my mind.

After a recent visit to an undisclosed location, I happened across a large black engine that looked vaguely familiar. However, the generous invitation for a look around included a proviso that no photographs were taken, which was fair enough. But after reading Pip Dunn's recent editorial in Railways Illustrated, lambasting the National Railway Museum for its lack of transparency concerning a certain locomotive, I'd been musing on the reasons for the veil of secrecy.

It might be my inner pedant coming to the surface but, having worked for the NRM and National Museums Liverpool - both classed as civil service jobs - I know that items in National Collections are owned, essentially, by the tax payer. So, why not just come out and say that something's broken and needs repairing. We'd all understand. After all, we're talking about something nearly 100 years old, that's covered millions of miles. And, what's more, we paid for it...
Labels: A3 LNER loco preserved prototype Steam