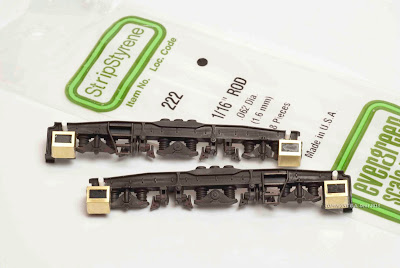 As mentioned previously, I've been working on a Heljan Class 58 this week, aiming to get the best out of a pretty good model. There are a few areas that need tweaking and, having settled on a specific example, there were some individual details to add. After only a few days of labour, the model is almost complete and is looking much more like the real thing. In fact, the weathering job alone has brought out the best of the plastic mouldings, taking away that plasticky look of most RTR locos, especially those in bright 1980s liveries like this one.

I almost came a cropper towards the end, forgetting to add sandboxes to the bogies until part way through the weathering job. Luckily, the bogie sides pull away from the chassis so they could be treated separately without disturbing the rest of the model. Equally lucky was the fact that I had some A1 Models etched sandboxes lying around, intended for a Hornby 58 project that was abandoned some years ago. Heljan do provide sandbox-fitted bogies to some of the Class 58 releases, but not on my donor model.

Having quickly soldered up the etched 'boxes and improvised the filler tubes, they were then painted and blended in with the weathered finish. They stick out a little bit, probably by about 1mm, but the loco is still 'in gauge', so I let them be.

What's left to do? A few decorative tweaks here and there before posing on my colliery layout for the finished portraits. Look out for the article in Model Rail issue 184. 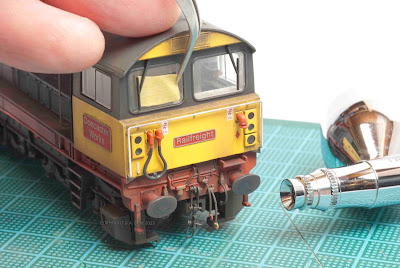