Bachmann's car transporter wagons loaded up and ready for action. 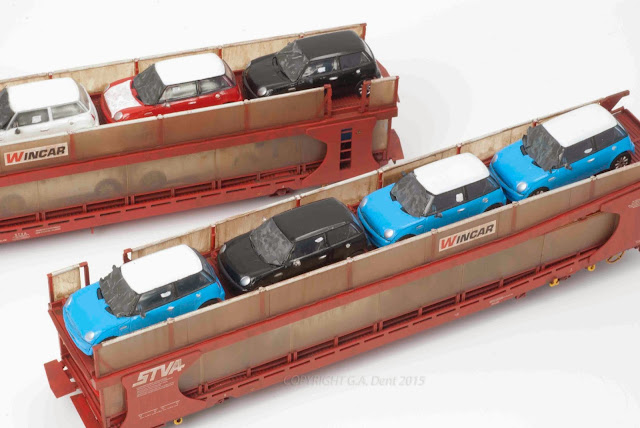 The Bachmann IPA twin-set was an exciting release for modern image enthusiasts a few years ago, and it certainly didn't disappoint when I finally got my hands on a couple. But they arguably look at their best when loaded with a decent set of motor cars, so I decided to have a go. My first thought was to stock up on die-cast models, but soon realised that the accumulated weight would prove too much, especially once a handful of twin-sets had been treated.

Next option was to track down some Rietze HO scale plastic cars, especially their early-2000s style Ford Mondeos to replicate the flow of imported vehicles that these wagons have commonly been used for. But, with these out of stock, I plumped for the easy option - Bachmann's Scenecraft 'small cars'. Offered in 8-packs, they're designed especially to fit the IPA transporter without overloading them weight-wise. They look very similar to the ubiquitous BMW Mini, despite the vague product branding, and can be readily detailed to an authentic appearance.

Although not a strict replication of prototype practice, I also decided to add some windscreen covers, more as a means of showing how they can be created simply and effectively, especially for modellers of other vehicle flows or earlier periods. You can see how the whole thing was done in the next issue of Model Rail magazine (MR207, out on 12 March)...
Labels: Bachmann cars detailing HO Model Rail modern OO wagons weathering