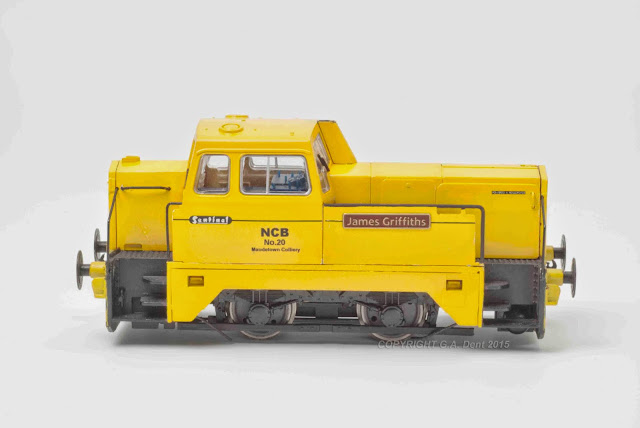 This was another of those projects that was begun about a year ago, but was soon put on hold while the more pressing 'day job' work piled up! As soon as the Hornby Sentinel first appeared, even though the first batch included a National Coal Board version, I wanted to see how one would look in a striking coat of 'high viz' yellow. As I'll be describing in the next issue of Model Rail magazine (on sale 12 March), I cheated somewhat and employed modern technology to give myself a preview of what the model would look like. Once I was happy, I took the plunge and took the original loco apart for repainting.

Another cheat - of sorts - was to use Tamiya acrylic paints, mixing up my own shades of yellow to create subtle high- and low-lights. As I intended keeping the loco in as-new condition, I didn't want it looking too toylike, so the subtle tonal shifts add extra depth to the bodyshell, especially around the bonnet panels and end grilles. The third shortcut was to mask up the existing 'wasp' stripe ends and black chassis to keep the repainting to a minimum.

Replacement transfers, including a rendition of the metallic 'Sentinel' and 'Powered by Rolls Royce' logos, plus the NCB markings, were commissioned from Railtec Transfers, who have just launched a Facebook page with lots of interesting stuff on it. The quality of printing and performance of Railtec decals is excellent. Indeed, a little bird tells me that the company has recently been producing transfers for a number of RTR products, so that's certainly another feather in their cap!

The nameplates are also bespoke, produced by PH Designs as part of a bulk order of fictional 'plates for my equally fictional NCB fleet - all have links with the coal mining industry in South Wales, in terms of people and places.

If anyone's interested, James Griffiths was a former miner, trade union leader and a Welsh MP who did a lot for the South Wales mining communities, as well as being credited as one of the architects of the Welfare State.
Labels: coal decals diesel Hornby loco Model Rail NCB OO painting PH Designs Sentinel Tamiya