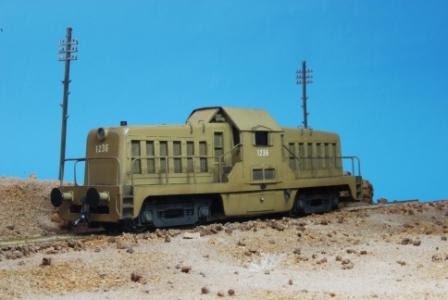 This scratch-built USATC Whitcomb was covered way back in the Nov '06 issue of Model Rail.

Further to the previous posting about my progress with various War Department wagon projects, I’ve been ruminating further on track plans and, more importantly, where to find the space for the layout.

I suppose it’s not the way that most layouts gestate but, after putting considerable time and effort into scratchbuilding a USATC Whitcomb diesel loco (featured in the November 2006 issue of Model Rail), I thought I ought to have a small layout on which it could run.

A number of track plans have been drawn up over the past few years, taking into account the very small area that I have at my disposal. The bare necessities of the layout are to allow enough shunting manoeuvres to maintain operational interest, whilst also showing off my kit-built, scratch-built and RTR-converted stock to good effect. I also wanted a minimum number of scenic features, allowing me to build a few interesting African buildings and the odd armoured fighting vehicle. 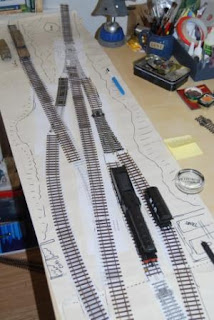 Despite the scenic section only being 6ft long, there is plenty going on with this rough impression of my ‘Desert Layout’s' track plan.

Some form of run-round loop will be required, with an adequate headshunt to accommodate a suitably modified 8F 2-8-0, which will be the longest form of motive power envisaged. Additionally, a hidden fiddle yard/traverse must also be incorporated. With all this in mind, the plan is growing from its original minimum space idea to a more complex undertaking.

Another diversion from the initial plan was the move towards finescale track. Initially, I intended to use up my stocks of code 100 track and turnouts that I’ve been carrying around with me for years. The nature of the real desert railway meant that the tracks were partially covered in sand and earth and I’d assumed that this would detract from the overscale appearance of the rails. 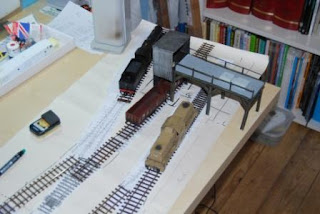 Plenty of time has been spent planning the track layout, beginning with a number of sketches in a notepad. Once I had a basic idea of what it was that I wanted, the next step was to draw it out full size on a length of scrap wallpaper. Peco’s full size facsimiles of track and pointwork have been used to check that everything will fit. 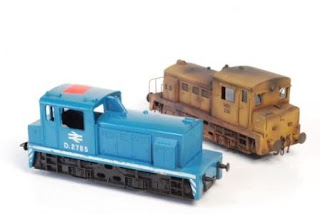 Having converted this little Lima 0-4-0 into a freelance WD loco of US origin (for MR133), I’ve recently obtained another donor model to form a second member of the fleet.


A small diorama was built to trial this track and various sands and ballasts, to gauge how the real layout would look. However, the large Code100 rails still looked a bit coarse to me, especially as the rolling stock is being built to a finer spec. So, Code 75 it will be!

As this layout idea is a little out of the ordinary, I’ve been faced with having to experiment with various materials in order to create believable scenery. The diorama featured in these photographs was built in order to trial some of these products and processes. On the whole, I’m pleased with the results although I will have to keep the sand clear of the running rails and point blades. Furthermore, the fine abrasive particles could prove damaging to the locomotives’ moving parts. 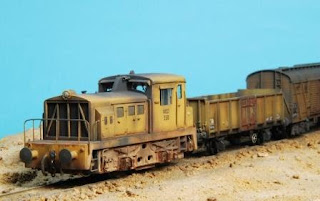 Some widely available scenic products have been utilised on this mini 'test diorama', including packs of cork bark and chippings from the Hornby range and tubs of ‘desert sand’ from Games Workshop. Perhaps the biggest resource that I’ve used, however, is fine, kiln-dried sand, left over from various rendering jobs about the house. 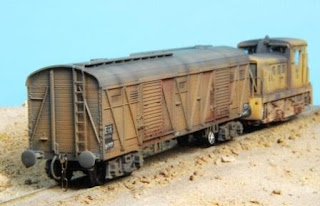 The Peco Code100 track has been successfully disguised with the sand and 'ballast', but the width of the rail heads still give it away. I think I'm going to opt for Code75 instead, although I may build another test diorama to make sure the finer metals don't disappear beneath the sand!
Labels: Africa ballast detailing layout Lima OO painting Peco planning scenery scratch-build track WD weathering Whitcomb