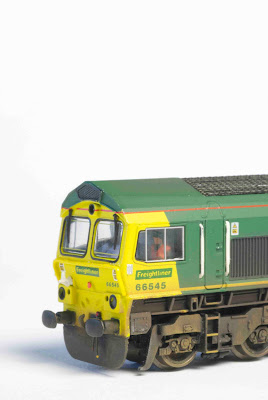 I'm not sure that a 2mm scale detailing project was the best thing to do after a tiring weekend at Model Rail Live, but I threw myself into finishing off the final piece in my Class 66 jigsaw yesterday, for a feature that will appear in Model Rail issue 163. Using the Dapol model, the cab interior was given a lick of paint, a driver and assorted detritus, such as discarded newspapers and magazines. I also fixed a new valance to the bufferbeam along with a scratchbuilt coupling hook and brake pipes. Look out for a full demo in the magazine.

Once weathered, it looks pretty good - not bad for someone who rarely works in N gauge, although I'm slowly becoming a convert... well, to a point!

I just need to take some portrait images of the other 66s that I've modified for the article - a handful of OO models, plus a whopper in G scale. 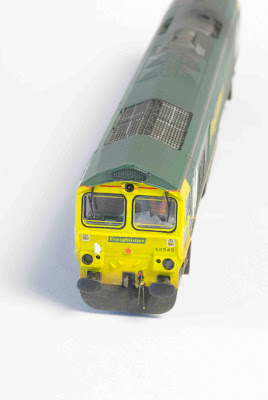 The eagle-eyed will be able to make out the enhanced cab interior and a suitably attired driver in this Dapol 66. Working in the smaller scale feels like good exercise for my eyeballs - I can feel them working overtime as I try and drill the tiniest of holes!
Labels: cab Class 66 Dapol detailing diesel figures Freightliner loco Model Rail N weathering