GRONK GETS THE PHD TREATMENT

Ex-BR Class 08 at work at Maudetown.
I hinted a few weeks back that I'd been working on a BR blue Class 08, trying to make the pre-shading method of weathering work on a locomotive. Well, the model has been finished for a short while but only entered service at Maudetown Colliery last night. I'm really happy with the faded and worn BR blue livery (applied over a triple grey factory scheme) and it was a real bonus to be able to mask up and preserve the original wasp ends, rather than have to apply them from scratch.

The model is a Hornby product, originally a Class 09, but with all the air brake gear removed and, befitting its second lease of life in industrial use, the vac brake has also been isolated as it will be employed shifting unfitted wagons around the colliery sidings. It's not based on any prototype, but was simply something I fancied doing with a spare model that was hanging around.

The major detail change lies in the bufferbeams, where some new etched brass overlays have been fitted to represent the distinctive early pattern of bufferbeams (not available on the Hornby or Bachmann 08s). the rectangular lifting eyes and different rivet pattern are markedly different to the later style. Look out for a detailed review of these parts in Model Rail issue 172 and a later article will show I achieved the weathered finish. The etched bufferbeams also include coupling guards and cross brace, as seen below, and are available now from the PH Designs website. 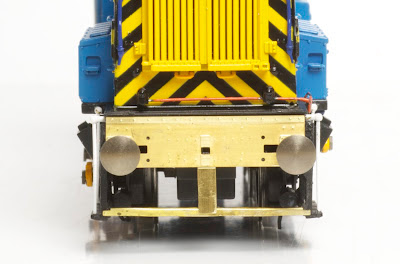