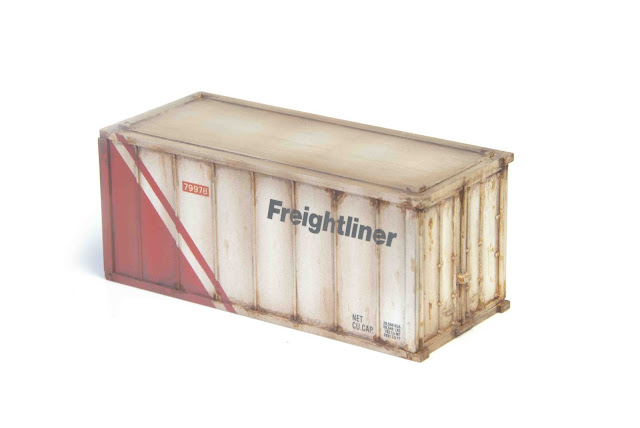 As part of a wider look at modelling post-1960s container traffic, I've just put the finishing touches to a few 'boxes' for Model Rail issue 171. Instead of just concentrating on the modern, ubiquitous ISO container, I thought I'd inject a bit of 1970s/80s nostalgia by building a Knightwing plastic kit of an older type of Freightliner 20ft box. After the original grey-with-red-waistband livery of 1965 to the late 70s, Freightliner developed the red triangular device, with repeater stripe and this was applied to wagons, cranes, trucks and even locos. It's a simple bit of graphic design, but a very effective one. The post-privatisation Freightliner TOC carried on using the logo for a short time before the adoption of the green/yellow scheme.

Although Fox do some suitable transfers for Class 47 locos, there's nothing (that I could find at least) for the containers. So, I used the Fox pack for the Freightliner lettering and improvised the other markings from the scrap box. The red traingle and stripe were masked-up and sprayed. Incidentally, Fox do a transfer pack for the short-lived Maxi- and Mini-Link container traffic of the late 70s, which would make for a nice modelling project.

My rusty, neglected box is destined to sit around my loco depot layout - a common sight in the 80s & 90s as the boxes found a new use as cheap, portable stores. 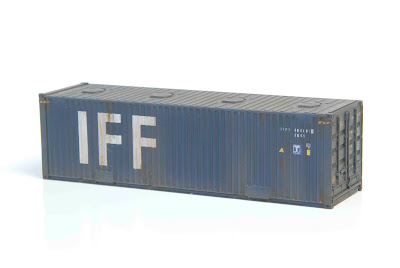 Also off the production line is this C-Rail Intermodal Bulktainer. Built from a plastic kit about 5 years ago, I've finally gotten around to painting and finishing it in the old IFF scheme (transfers also from C-Rail). This livery is suitable for the late BR period - just a shame that the majority of RTR freightliner wagons are aimed at the post privatisation scene. Hopefully, someone will bring out a 21st Century quality rake of BR's original FFA/FGAs...