Class 58 next in line for the detail treatment 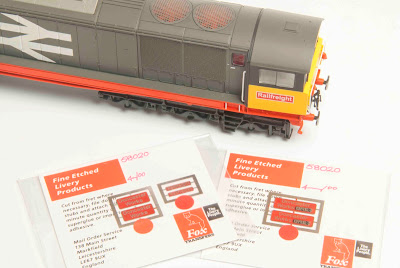 Been spending the last few days swotting up on all things Class 58, with a Heljan model to improve for a forthcoming project in Model Rail mag (issue 184). It only seems like yesterday that the Danish '58' was released, yet it has been overshadowed in the past few years by other, arguably more glamorous diesel models (such as DP2, Lion, etc) and there aren't too many of these around the mo'. Maybe not everyone has my liking for the workaday freight machines from the 1980s?! Maybe Heljan might think about releasing another couple of batches of the Class 58s in the near future, to keep the likes of me happy...

Anyhow, Ben unearthed his model of 58001 and we settled upon renumbering it to 58020 with the name Doncaster Works. There were two different style nameplates fitted to this loco and Fox Transfers helpfully offer both. As we liked the version with the Railfreight 'plates on the nose ends, we went for the later pattern. A few minor detail upgrades are planned, although nothing too drastic. Indeed, Heljan's rendition is pretty good as it is. For research, I've dug a few interesting books and articles out of my library, including some news stories from around the time of the Class 58's introduction in the mid 1980s, as recounted in Rail Enthusiast and Modern Railways. There was also a great article in Model Rail, way back in issue 35, (September 2001). That was before my time on the mag, but I can clearly recall buying that copy, from WH Smith in Torquay. Funny how you can remember the most pointless things...?