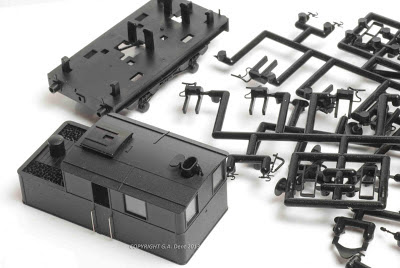 I've had the pleasure of assembling a number of Sentinel bodyshells in preparation for painting up a number of livery samples for Dapol to work from, allowing production of another batch of Model Rail's hugely popular RTR 'OO' gauge model. Looking like a regular plastic kit from the likes of Airfix, the sprues contain all the detail components, such as brake gear, sand boxes and footsteps. The bodies are moulded in one piece with a few extra fittings, such as the coal bunker and chimney.

When you see RTR models in this state, you can fully appreciate the amount of design and development work that goes into them, allowing for detail variations to be catered for, simply by the fitting of alternative parts. Furthermore, the bare plastic also reveals just how crisp the moulded detail is, especially on the grille louvres and small fittings.

All of these parts were left over from previous production runs and building them up into complete locomotives is proving great fun. Indeed, it has reminded me of my younger modelling days when I used to assemble Hornby locos from unpainted spare parts (in the days when they were widely available and cheap), especially Class 25s and 47s which I'd be hacking about, super-detailing and painting anyway. It used to prove economical in terms of cost and labour as well as keeping me out of mischief.... those were the days, eh?

It's a shame that such moulded plastic parts aren't as freely available nowadays, although Heljan did offer packs of injection-moulded sprues for a while; but stocks of these are now very limited (see Howes Models' website). I suppose it's an inevitable consequence of outsourcing production to the Far East; who would want to pay for a container's worth of spare parts to circumnavigate the globe?!

Returning to the Model Rail/Dapol locos, the next four Sentinels offer quite a range of liveries and owners, with one in particular being very interesting and may prove a challenge to paint...