Where did the logo go? 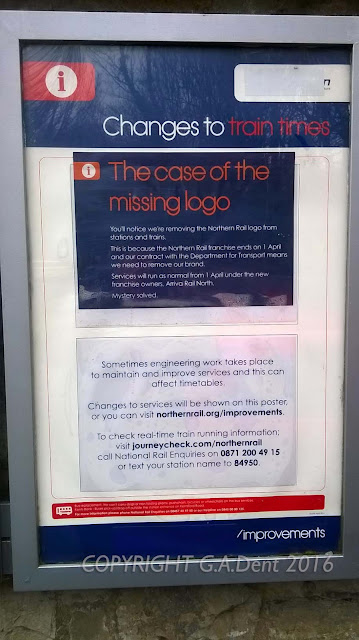 I've noticed in the past few weeks how the Northern Rail logo has been gradually disappearing from stations around the North West (and further afield I imagine). The franchise is being handed over to Arriva from April 1st, but it seemed a bit premature to be wiping out the outgoing brand's image for weeks in advance. You'd think it would be up to the new franchisee to sort all that out.

Anyway, on a visit to Kents Bank station in Cumbria, I noticed an information sign explaining why the Northern de-branding was being undertaken. Apparently, it's a requirement of the contract with the Department for Transport (DafT, oh, er sorry, DfT) that the branding is to be removed in advance of the changeover. I'm assuming this is to minimise confusion for passengers over who is actually running the trains? Maybe Arriva will have to introduce their branding in a softly-softly fashion to begin with, in order to effect a gradual transition? Can't see it somehow!