Plastic kit turns into a labour of love. 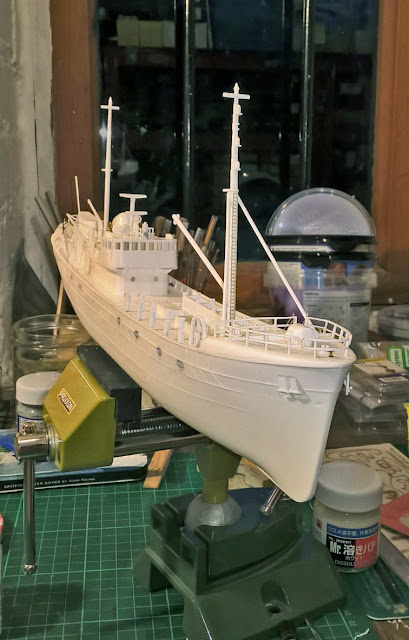 With a maritime feel planned for the next issue of MODEL RAIL, I thought I'd try my hand at building a typical North Sea fishing trawler. Using a longstanding Revell plastic kit (that dates back to the 1970s under the Monogram brand), the scale is roughly suited to 2mm scale/'N' gauge and would provide an excellent focal point for a rail-served harbour or wharf. The kit is a tad basic and takes a few liberties with the prototype, but it essentially captures the look of one of the Ross fleet of trawlers working out of Grimsby in the 1960s/1970s.

I'd originally set aside a couple of days to get the assembly complete, followed by another few days painting and weathering. However, thanks to the need to fettle virtually every detail fitting before installation and add filler to the joints, it's taken two weeks to get this far, albeit with other jobs fitted in between stages - working relentlessly on filing down the hugely over-scale railings would drive anyone potty, so plenty of breaks were needed.

Plenty of extra details have been added, mostly fabricated from Evergreen plastic strip, section and rod. As there are no steps between levels of superstructure, only feint moulded ladders, I've had to build my own, which took a good few hours. The moulded ladders have also been replaced with photo-etch from NBrass Locos, making quite an improvement.

Painting is now underway and the ship is really coming to life. For a full lowdown on how the project unfolded, look out for issue 228 of MODEL RAIL magazine, on sale from 20 October.