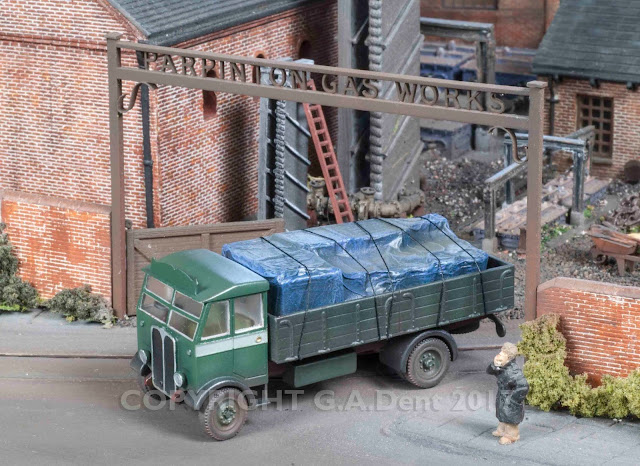 I was rummaging inside a box of scenic accessories and came across a kit-built lorry that I built a couple of decades ago. Alas, it was in several pieces, the cab in particular suffering from severe crush damage.

My first impulse was to shrug and confine it to the bin or, at best, salvage some of the parts for future use as scenic scrap. However, I thought better of it and decided to set about repairing the damage - and I'm glad that I did!

The cab front was rebuilt with plastic strip, which was a bit fiddly, but otherwise the job was easy enough and a useful way to spend a few rainy summer evenings. The paint/weathering job was comprehensive and far better than my original handiwork (pre-airbrush days!), although I reprised the handsome green and white livery. It could do with branding, but I haven't settled on a haulier's name yet. Perhaps 'Dent Salvage'?!

With the Coopercraft kit complete, a sheeted cargo was created using a stone-cast load from Ten Commandments, covered with the wrapping from a chocolate biscuit, duly painted and weathered. It took a few attempts - and biscuits - to get this looking just right...