1970s DMU gets the weathering treatment. 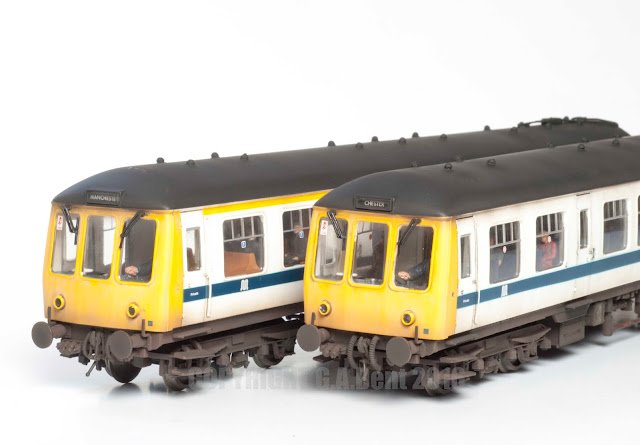 In an effort to get my workshop into some semblance of order, I spent the weekend packing up previous projects - those completed and those abandoned (or 'paused'!) - for safe storage in the attic. One of the things I came across was this lovely Bachmann Class 108 2-car DMU, in the less-than-practical 1970s scheme of white and blue.

Applied to units fresh from mid-life refurbishment, the brown underframes and dark grey roofs were a wise choice, partly obscuring the grime that inevitably accumulated in these areas. The bright white sides and yellow ends did get rather grubby, though, despite the planned regular cleaning regimen.

It would be easy to give this DMU a heavy layer of grime, as I would with some plain blue DMUs but, as even the slightest addition will show up on the stark background, a more restrained approach was needed.

The yellow ends were treated to washes, using slightly lighter shades of yellow artists' oil paints, imparting a slightly faded, washed-out look. The sides and ends were then given a wash coat using MIG's Neutral Wash, a mid-grey shade of enamel wash, designed for use on white and lighter backgrounds. This toned down the bodywork to a satisfying degree. Slightly darker washes were then carefully run into the door seams to bring out the detail relief further.

With this groundwork complete, the airbrush came out and a light misting along the lower and upper edges of the sides and ends was affected. Heavier deposits were sprayed onto the chassis and roof, and hey presto! The process was recorded in full in a new book that is due to be published later this month - more about that soon...

I took the opportunity to populate the interior with train crew and passengers, while also installing a set of laser-cut gangway bellows, from York Modelmaking, which finishes off the DMU nicely.

The unit is now safely packed away, awaiting a layout on which to run - hopefully that won't be too far away. But I've been saying that to myself for years now...!