Town gas works due for demolition. 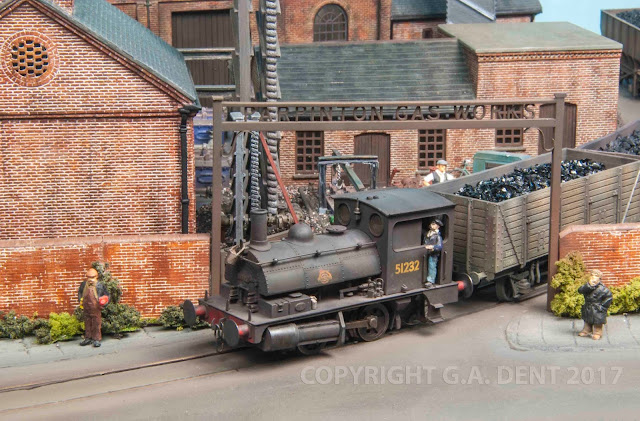 Built for a one-off cover shoot and magazine feature, Parpinton Gas Works was simply a scenic diorama on a sheet of thick MDF. With no reinforcing structure or protective shell, it was inevitable that it would be prone to damage while stored in a very untidy and dirty garage. Although I've used it for a few more photo shoots in the past year, for other magazine and book projects, the number of unblemished buildings and scenery were getting fewer, so I decided to cut my losses and consign the model to history.

Virtually everything bar the track and ground cover has been salvaged for re-use. Indeed, most of the structures had already been employed on numerous other layouts and dioramas - I hate to throw anything away.

Before the demolition team moved in, though, there was just time for the last rail movement along the High Street, as a 'Pug' hauled away wagons of unburnt coal from the closed works' stockpiles. As soon as the last wagon clears the entrance, the huge wooden gates will be shut for the final time.
Labels: diorama gas industrial layout lineside Model Rail OO Parpinton recycling scenery scenics Steam