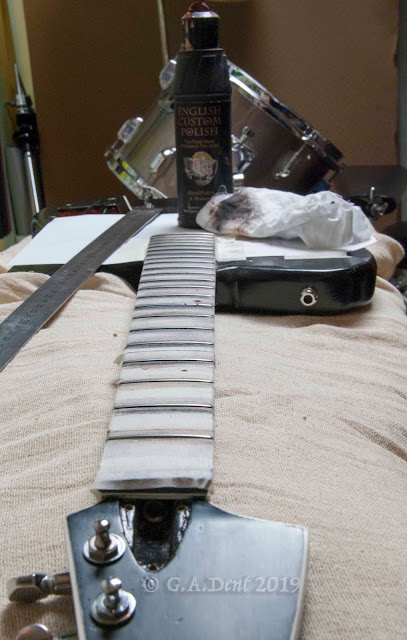 At last, after putting it off for a few years, I've finally taken the plunge and stripped my favourite guitar down to its bare bones. It has been in need of some TLC for a while, in terms of both the 'mechanics' and the electrics. A handful of running repairs in the past have kept it working but, after 25 years of noble service, it's certainly earned a full break-down and rebuild.

Inspired by Brian May's homemade guitar,  I originally built this instrument at school in 1991, using a mahogany leg and teak worktop from an old bench out of the science labs. With some nifty on-board sound effect circuitry, a Jackson Pollock-esque Union Jack artwork on the body, it got me an A grade in Design Technology. A few upgrades followed in the mid-1990s, as my playing improved and I joined a band or two. Better pick-ups and streamlined circuitry were installed, while a more sober paint job followed, although the application was a little haphazard.

I don't mean to boast, but it's still the best-playing guitar I've come across, even compared to some very expensive, famous-brand models. It sounds good too - probably better than it looks - with a distinctive tone and plenty of sustain from the dense timber. But, then, I'm obviously biased!

According to an inscription under the neck, there hasn't been any significant work on the guitar since 1998 and there was plenty of grime deposited in all of the nooks and crannies. After stripping-out the electrics, I've levelled and re-profiled the frets, before giving them a thorough polish to get them super-smooth. In all the years, I've never had to adjust the truss rod (the steel rod set within the neck to counteract the tension of the steel strings), although I'll check the neck later, once the strings are back in place. 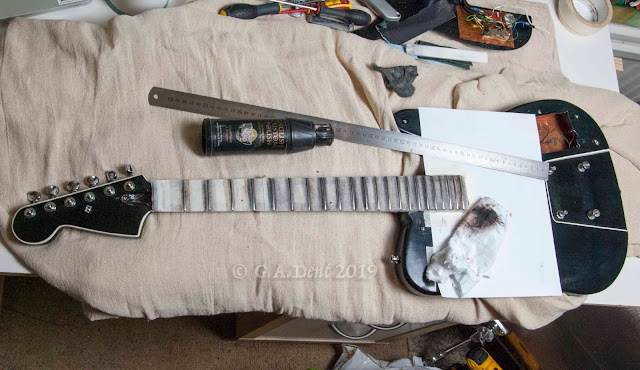 I'm keeping the Schaller Golden 50 pickups that were fitted in 1996 as they really suit the guitar. Alas, they don't appear to be in production these days. The slide switch (also Schaller) is about 10 years old and, although I was going to replace it, a thorough clean has seen it return to perfect working order. New volume and tone controls have been installed, with new cables soldered in position and plenty of insulation added to avoid any short circuits. I've also added self-adhesive copper strip to all internal surfaces in order to reduce interference.

Now that the wiring is complete, it's probably the best it's ever been and should give years of reliable service. This is thanks mostly to my improved soldering skills and confidence. Furthermore, the fact that I'm taking my time with this overhaul also helps - all previous repairs have been done in a hurry.

Next job? Clean up the rosewood fretboard and apply a coat of lemon oil. When that's dry, reassembly, setting-up and testing can begin. 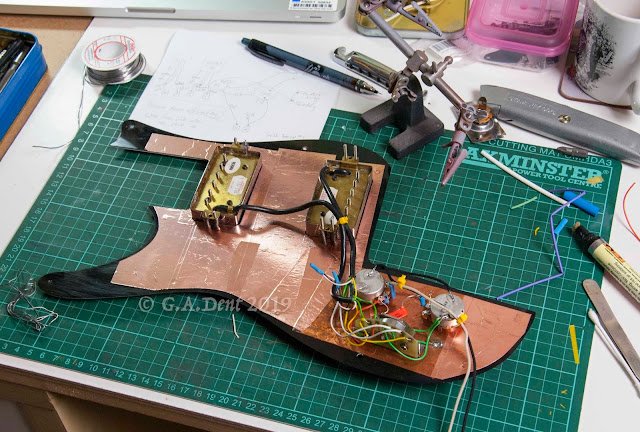