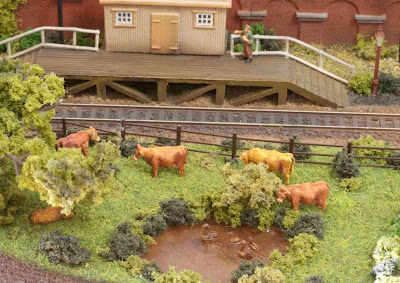 In between changing radiators, stripping wallpaper and replacing skirting board, I've managed to get a little bit of 'fun' modelling done on my mini N gauge layout project. The farm has been populated with cattle and machinery and the pond now plays host to a small family of ducks.

The cows are from Langley Models and I've painted them up as a herd of South Devon cattle, in the distinctive orangey-brown shade. This sort of suits the loosely GWR-theme of the layout. However, I'd really wanted to paint them as a Limousin herd, which are amongst my favourite bovine breed (reader, I'm a cow spotter!). But these animals, originally from central parts of France, were not introduced into Britain until the early 1970s, so out of my time period as far as this project goes. It's going to be a late 1950s/early 60s era scene.

The little pagoda style halt is in place and now only lacks a platform sign. I need to come up with a name, though. Currently I'm thinking of Bank Farm Halt or White Dog Halt... it needs to be short, to fit onto a sign about 12mm long, while still being legible. 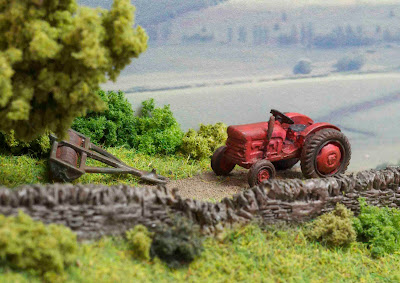