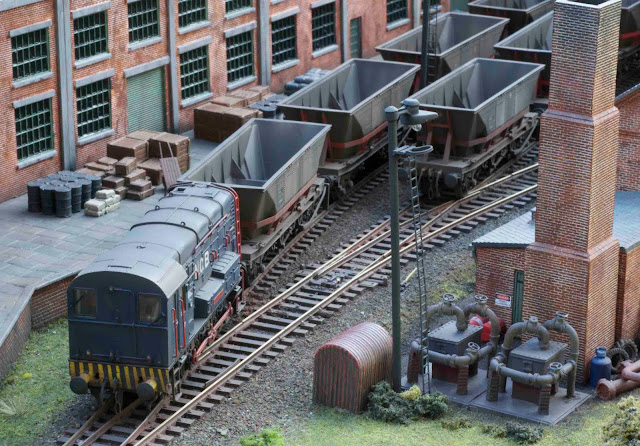 Maudetown Colliery finally received its first rakes of HAA merry-go-round hoppers, following  modifications to the loading machinery. Having been built in the immediate post-Nationalisation era, Maudetown's washery and loading plant was designed with the humble 16t and 21t open wagons in mind.
However, there are still a few operational problems to overcome, not least concerning the resident NCB motive power - both steam and diesel - that are not equipped with air brake equipment. Also, only the original-pattern HAA hoppers are permitted up the Maudetown branch due to clearances within the tunnel and under the loaders, so none of the HBA, HDA and HFA wagons with their top skips can be accommodated. 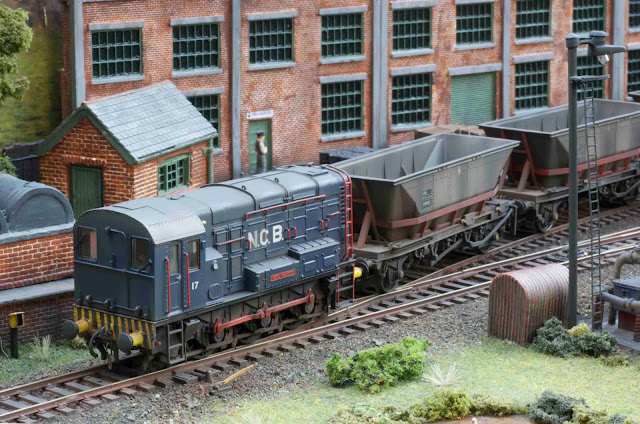 So, until these issues can be resolved, the humble little NCB shunters are having to move split rakes of HAAs up the branch to the colliery from the BR exchange sidings down the valley. For now, the NCB engineers have decreed that a maximum of four loaded wagons and six empties can be moved at any one time. Luckily, the HAAs are fitted with traditional hand brakes on opposing corners, so there is a degree of safety available by 'pinning the brakes' down before the descent of the valley. It's doubtful whether the BR chaps would be happy about their wagons moving with lumps of wood jammed between the brake handles to keep the 'shoes on', or maybe they're turning a blind eye.
Either way, I wonder if the inevitable outcome will be for BR to reach an agreement for its own locomotives to traverse the NCB's private line? If so, it would be nice to see a blue '37' - or even a pair of '20s' - chugging up the steeply graded Maudetown branch with a full rake of MGR hoppers.
Labels: BR Class 08 coal diesel Hornby layout loco Maudetown NCB wagons