A 'new' old tool takes up residence in the Dent Workshop 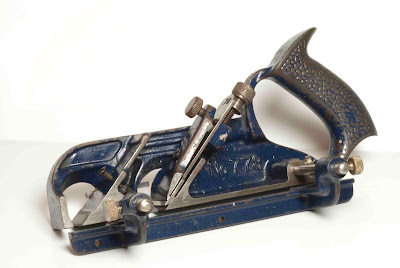 Apologies for going slightly off-kilter with this post but I've been filled with enthusiasm about this latest acquisition to my woodworking toolbox. I've been after a 'rabbet' plane for years, after growing disillusioned with power routers - and any other noisy power tool for that matter. Having been trained in furniture making using the 'proper' tools, I've been wanting to get back into the craft recently. Having set my heart on a plane of the legendary '778' pattern, introduced from 1959, I'd been looking through modern tool catalogues with little joy. Indeed, such is the small market for traditional style tools that there's either the cheap-and-nasty copies made in the Far East or hand-made luxuries that retail for three-figure sums (just the blades for Lie-Neilson tools, for instance, cost over £100!). The American Irwin firm now own the Record name and toolings and, to their credit, still produce the '778' plane, but they go for over £150.

Therefore, the secondhand market seemed like a more realistic option, and I managed to get this little beauty from a place in Norfolk for the princely sum of £20. It's seen some wear and tear and the working surfaces had a light covering of rust but nothing that a couple of hours' work couldn't solve. Indeed, it took me back to working at the National Railway Museum were I was regularly cleaning up similar lumps of metal, including tools that were part of the collection (I once had to conserve the entire contents of a retired BR plumber's tool chest!).

Having reassembled the various parts and honed the original blade, the tool is working almost perfectly. There's a lot of truth in the saying 'the old ones are the best', especially when talking about tools. Most of my most treasured tools are those that have had previous owners, be they secondhand purchases or gifts from older, retiring craftsmen. One of my old colleagues at the NRM generously passed on a lot of tools, some of which had belonged to his father and grandfather, both of whom had worked for the LNER at York Works. Every time I use any of these tools, I'm always moved to think about those people, which is a nice thing.

Despite being merely a mass-produced, and a one-time common-or-garden carpenter's tool, the Record '778' boasts a very high quality in terms of the iron castings and steel forgings and is a living testament to the erstwhile Sheffield toolmakers. Of course, looking back on Britain's once World-leading steel and manufacturing industries can also be depressing. Indeed, with the passing of a certain former Prime Minister this week, we've had plenty of time to reflect on what used to be.