Heljan, Hornby and Bachmann AC electrics under the knife 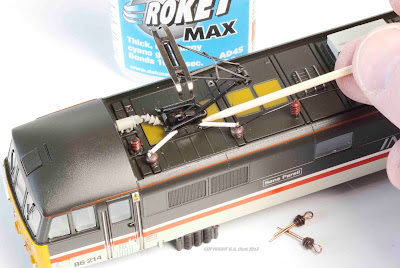 As part of an upcoming feature for Model Rail issue 183, I've been sprucing up a variety of overhead electric locomotives from the 1980s period. Mostly rendered in my favoured shade of blue, there is also one in the 'Executive' version of the Inter City scheme, namely Heljan's model of 86214 Sans Pareil. Released a few years ago, Heljan's 86 has received mixed reviews, but I rather like it, especially after a bit of remedial tweaking, especially including replacing the pantograph.

Above can be seen the new pantograph in situ, with scratchbuilt mounting arms. Given that the Sommerfeldt 'panto' is for HO gauge European-outline models, the arms are too short for the OO '86'. With the help of small split pins and plastic strip, the problem is solved. Apart from this modification, new nameplates and a few other odds and ends combine to create a more refined end product. I've also back-dated my model slightly, placing it around 1990, before the use of DVTs in pull-push mode, so the rooftop fire extinguishers have been removed.

I always hated being pushed at 110mph between Liverpool and London by an '86' or '87' in the late 1990s. I'm sure my fears were unfounded, but being propelled at such speeds purely by the buffers of a loco (no fixed buckeye coupling or buffing plate like you get on Class 91s) never filled me with confidence. Mind you, it was better than a Pendolino...