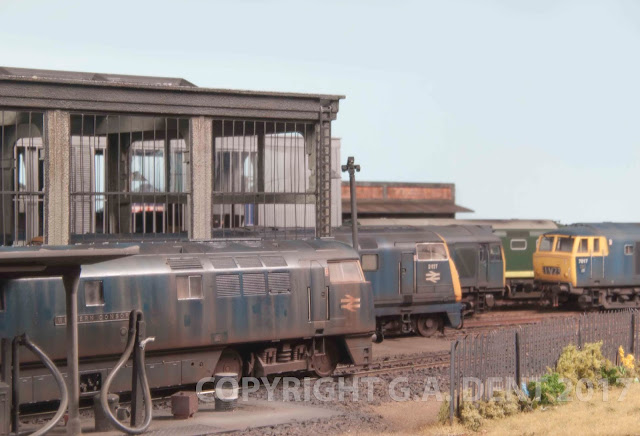 Depot diorama goes back in time.

For the first time in over a year, I managed to extract the crate containing modern diesel depot diorama that had been buried against the rear wall of the garage. I'd been worrying that the MDF baseboards would be going mouldy in the damp conditions but, luckily, they seem to be OK. While the diorama was accessible, I thought I'd take the opportunity to stage a photo shoot, with a variety of traction. First up was a selection of BR Western Region diesels from the 1970s era.

It's nice to see a number of these models out of their boxes for a change. However, I wish that I'd built this as a working layout rather than a static diorama. Maybe I'll have to rebuild it as part of a new layout one day...?
Labels: BR BR blue Class 35 Class 42 Class 52 depot diesel diorama Hymek MPD OO shed Warship weathering Western Western Region