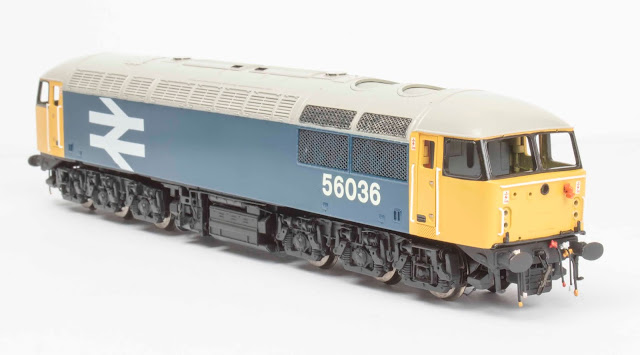 This is a project I've been meaning to do for years and I can't quite believe it has taken so long to come to fruition. Finally, five years after I stripped the original paintwork from the bodyshell, this Hornby Class 56 has gained a new paint job in the form of the splendid BR 'Large Logo' blue livery. Despite a large chunk of the Class 56 production being turned out in this scheme from new, it's not a livery that has featured in Hornby's plans for the revamped Type 5 model. Yet the old, 1980s-era Mainline/Dapol/Hornby version had regularly appeared in 'large logo' over the years.

Whatever the whys and wherefores, this colour scheme really suited the Class 56 and it's how I remember seeing them, along with plain blue versions. They were never this clean and shiny, though, being invariably covered in coal dust and grime as they trudged back and forth from collieries to power stations in the North and Midlands.

The loco has been painted using Lifecolor acrylics and, while I write this, has just received a final coat of clear gloss to seal the decals in place. When that has cured completely, I can start on the weathering process, which should have a dramatic effect and create a (hopefully) much more lifelike appearance. 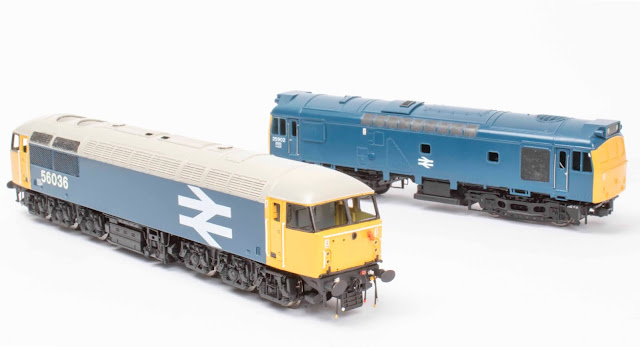 This is my first proper loco repaint job for well over a year, so I felt a little rusty to begin with. But, just like buses, you wait an age for something, then two turn up at once.... It made sense to maximise my time in the spray booth, so I've also been working on a Heljan Class 25/3, using a pre-production sample that was supplied unpainted. I struggled to remove the glazed windscreens, so had to resort to masking them in situ and I've added some etched details from a Brassmasters kit (aimed at the Bachmann '25') to ensure that the boiler grille and access steps were plated over, as per my chosen prototype.

I'd initially thought of recreating 25312 Tamworth Castle, in her infamous 'ice cream van' livery, but I've plumped for 25902 instead, as I remember seeing the real loco working at Arpley Junction in the last few months before final withdrawal. She's also due an extensive weathering job, as '902 was looking pretty shabby towards the end. Incidentally, the Heljan 25 looks to be an attractive model and I'm looking forward both to getting this sample complete, but also to seeing the production models in the flesh. 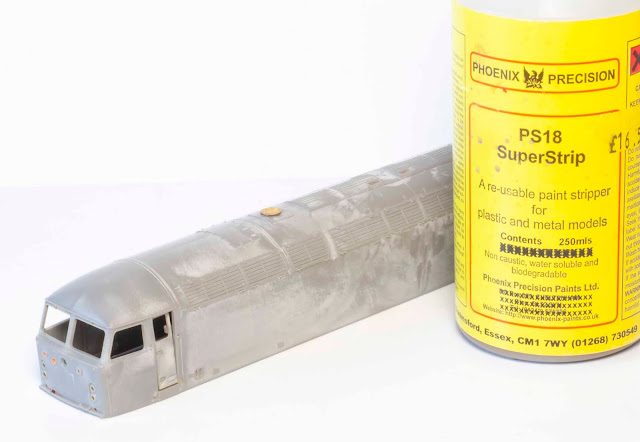 The repainting process will be described in issue 279 of Model Rail magazine, on sale October 1st. 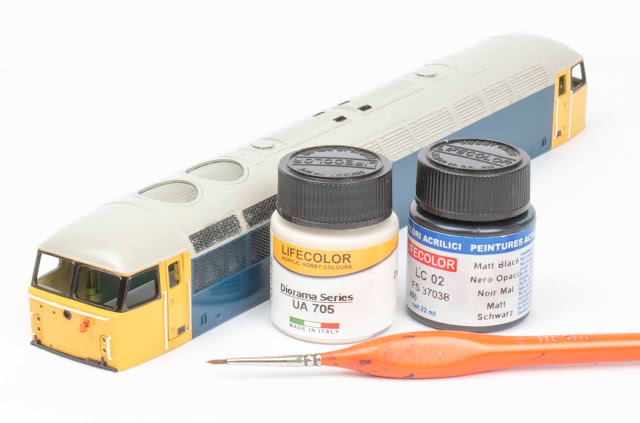