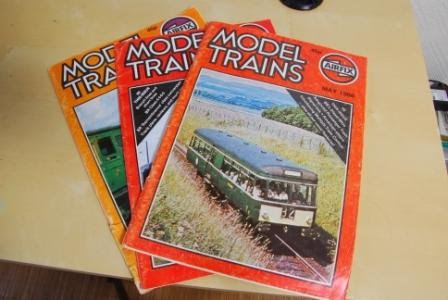 It's interesting how virtually every front cover feature an image of a real train, rather than a model!

A good friend of mine recently popped round with a big bag of old magazines that she’d seen in a charity shop and thought I’d be interested in. Being four years’ worth of Model Trains, the Airfix sponsored model railway monthly, they contain some fascinating features.

The pile even included the first issue – January 1980 – that had originally come complete with a free bag of Airfix platform figures. I’ve only had chance to flick through about a dozen of them so far, but what immediately caught my eye was a feature on what is obviously an early version of DCC, the Airfix Multiple Train Control System (May 1980 issue). 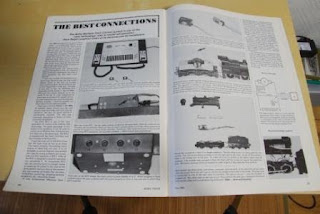 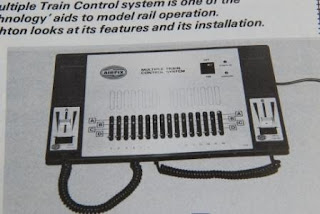 Does anyone else remember this digital control system?

Requiring small electronic chips to be inserted into individual locomotives, the system boasts of its sophistication and ability to control up to 16 locos (4 at one time) and the article demonstrates the fitting of a chip into an Airfix OO gauge LMS 4F, along with explaining how it all works. I’m old enough to remember Hornby’s Zero1 system, but this device passed me by (probably because I was only five when this article was written). 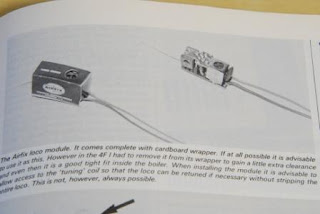 The 'decoders' look a bit bigger than what we have today.

What always strikes me when I glance at old (mostly pre-1990) modelling magazines is that, even the most excellently written and thought-out practical projects are incredibly difficult to follow due to the poor quality of photography and reproduction. A handful of tiny, dark, black & white images - some of which are pretty hazy - are not conducive to an easy modelling session. It reminds me how lucky we are with today’s high quality digital photography and the emphasis on visual aids in practical articles (in some magazines, anyway).
Labels: 4F airfix DCC Hornby LMS