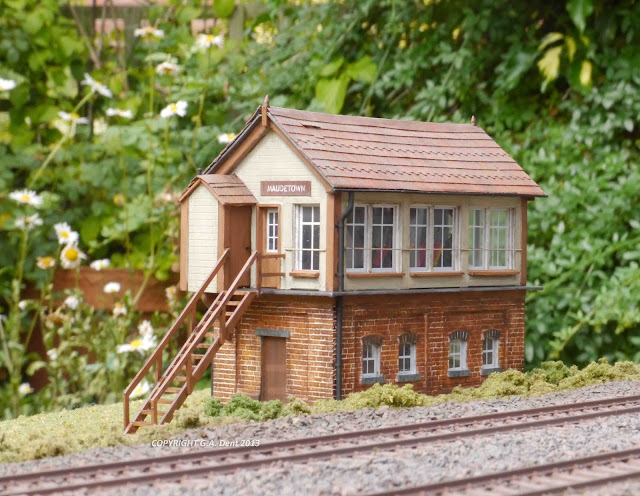 Started way back in Autumn 2011, this signal box has finally received the finishing touches that it has been awaiting since the project was put on hold last year. Based on the Metcalfe 'OO' gauge card kit, I've clad the walls with embossed plastic sheet and re-roofed it with packs of laser-cut tiles from York Modelmaking. With a full interior detailing job (including real wood floor) and a few other bits 'n' bobs, such as guttering, drains, chimney, new footsteps and handrails, the 'box has been transformed into a much more realistic building.

Intended for use on 'phase two' of my Maudetown Colliery extension, the main reason that this project was held back was the delay in building 'phase one' of the layout's additional scenic section. However, with a magazine deadline agreed, I decided to finish the model now, which consisted of adding the smaller external details, printing up some suitable nameboards, using the BR enamel-style signs available from Scalescenes and a little touching-in of the paintwork; quite a nice task for a Monday morning in fact!

The project will be demonstrated in Model Rail issue 187 (on sale in September).