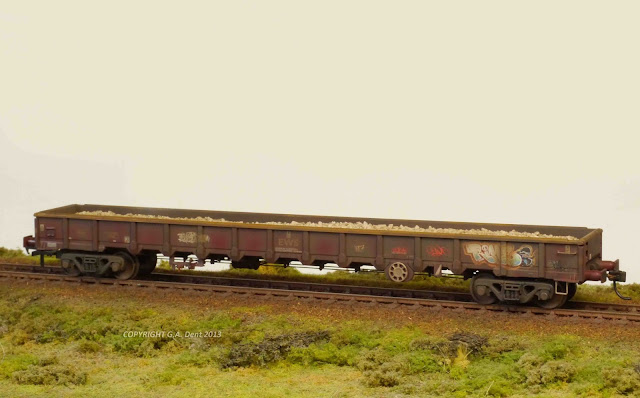 An inescapable facet of modern life is the prevalence of graffiti 'tags' on anything that stands still for more than a few moments, especially in urban areas. Those cheeky little chappies who aren't satisfied by sharing their artistic self expression on paper, canvas or other traditional mediums, pop up everywhere these days, not just in the big bad cities. Indeed, my fairly rural locality has its fair share of spray paint and marker pen on lamp posts and road signs.

I might be showing my age here, but there has been a definite shift in the style and quantity of graffiti over the past few decades. From what I remember, growing up in the late 70s and 80s, what graffiti there was was usually limited to daubed messages of teenage infatuation. There was a touching "I still love Deb, by Les" painted in emulsion onto the bridge near Sankey station where I did most of my 'trainspotting', replete with correct spelling plus a comma and full stop in the right places! This missive lasted for years, well after both protagonists had settled into married life with other people - 'Deb' being the sister of my best mate at the time). There was also a tongue-in-cheek plea to the authorities to "Free Arthur Fowler" on a bridge in Warrington (an Eastenders character of the time).

I can also remember various political messages on motorway over-bridges in and around Liverpool, highlighting the discontent of the time. CND symbols, comments for and against the IRA, support for striking miners at nearby Bold colliery, comments on the Falklands and even something about a bloke who'd been sacked at the Ford plant. These were all topical issues that remained in the collective consciousness due to long-lasting graffiti, and were seen by thousands of people a day. Having spent most of my youth looking out of bus and train windows, along a small number of routes, it's no surprise that these messages have been so vividly remembered.

There were also countless references to local football clubs and the ubiquitous branding of "The Fall". It was some years before I worked out that this referred to a Manchester punk band and - for the trivia fans - this free (and illegal) marketing technique was later pinched by the Stone Roses, when they emerged in the late 80s.

These old slogans, painted by hand and often with a tin of emulsion and a brush, seem somewhat naive now and are very easy to replicate in miniature form - a fine ink pen or paintbrush doing the trick, with a few drips and runs of excess paint here and there for added effect. Perhaps there's a potential sociological research project in analysing how graffiti has changed in the last 30 years, with a shift to US hip-hop influenced 'art' and the obsession with branding everything in sight with the name of the 'artist'. What does this reflect about our society today, I wonder?

Whatever the rights and wrongs of this phenomenon, any modeller of the post-1960s scene should think about recreating graffiti on buildings and railway stock, especially freight wagons that now spend time sitting in shady goods sidings at weekends. In my case, most of the stone traffic that passes the end of my street is marred by the majority of wagons being defaced in some way or other and there are now a number of authentic transfer options to depict the contemporary, American-style (?) of 'tagging'.

This particular wagon - a Bachmann MOA - sports graffiti from a pack of Railtec Models transfers. There are a number of different packs to choose from, some of which show a good bit of artistic merit, as well as the inevitable repetitive scrawling of a single name, or 'tag'. I'm not sure if these are copied from real life examples, but they certainly look highly realistic. It requires a little help for the decals to cope with the wagon's raised ribs and a softening solution (Micro Sol) was employed for this. A demo of the weathering and graffiti application will appear in a forthcoming Model Rail DVD programme, due out later in the year.

Applying graffiti as part of the weathering process is actually good fun, inserting this stage towards the end of the job and then weathering the slogans to make them appear a few months old. Indeed, the act of layering various deposits of dirt, grime, vandalism and repairs, make for a more interesting finish. 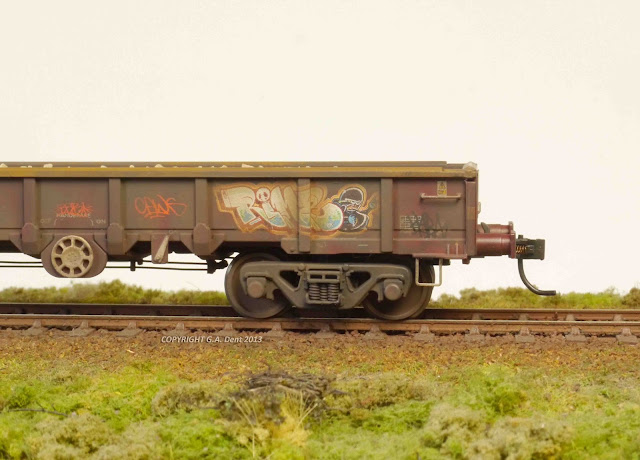