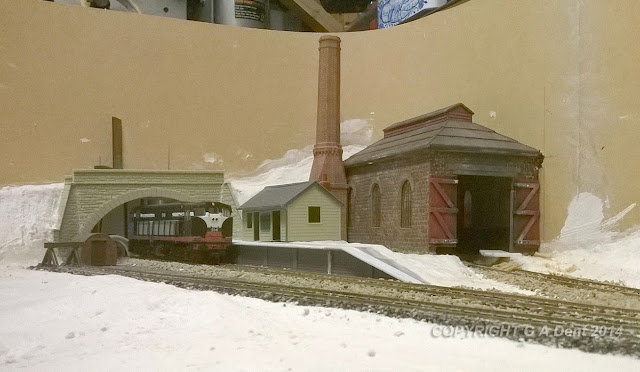 My recent career has been littered with layouts that have started in a burst of enthusiasm, but ground to a halt due to lack of time and space. Ironically, with a recent shift in my professional role, I've actually had a bit more time to devote to a layout plan that I'd been ruminating on for some time. Certainly, with less in the way of 'modeller's fatigue', taking on a more editorial role has allowed me to dabble on more leisurely projects without the stress of deadlines and ultra-fidelity.

Having built a baseboard a while back, it was originally planned for a quarry/cement-themed terminal. However, I soon realised that it lacked the necessary 'headroom' to accommodate the tall silos and chimneys that I'd envisaged. With that project put on hold, I was determined to make use of the baseboard, so this little layout started life...

Inspired by a few of Chris Nevard's mini layouts, it's a fairly simple affair with just one 3-way point, a small halt platform and a goods siding serving a small factory. Another siding in the foreground is to assist in shunting and storing extra wagons. Initially, the plan is to base the layout somewhere in rural Ireland in the 1970s, but it may later be shifted back to this side of the Irish Sea. Or maybe it can be switched between the two...?

In a flurry of activity, spread over a few evenings, the track was laid, wired and fully tested, before ballasting. One of the things I'm trying to do with this layout is to employ stuff that I already have in stock, rather than buying anything new. So, there will be a few buildings seeing a new lease of life, having been salvaged from bygone layouts and dioramas.

I'll also be trying out some new scenic products and tools on this layout, including some lovely kits of Irish rail infrastructure - one of the main reasons why I decided to build the layout - which I'm very excited about. In fact, I'll also be using a static grass machine for the first time - hope it works!