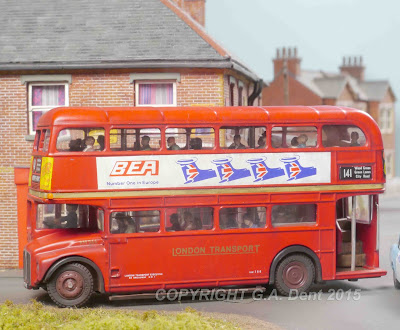 Don't you just love red buses?! They're one of those childhood obsessions that never leaves your imagination. Although all the buses I remember as a little kid on Merseyside were green, my uncle gave me a big red toy bus as a toddler, which seemed very exotic. The idea of riding on the open rear platform also appealed to my youthful imagination (surely this wasn't allowed?!). In our risk averse society, it's amazing that the Routemasters lasted in service as long as they did, especially on the Capital's busy roads.

Talking of open doorways, how I remember those hot summer days when the Crosville Bristol VR (on the H2 service) would be speeding out of Liverpool at 50mph, with the front doors wide open. I'd feel excited, yet terrified and gripped the seat rails for dear life. And then my brother would vomit into a Kwik Save carrier bag. What fun we had.

On a less smelly note, my improved EFE die-cast RM bus is now finished and ready for service. It has a full compliment of passengers, a driver and some extra period advertisements. Missing details such as licence plates and AEC radiator logos have been added, along with some detail painting, especially around the open platform and stairs. All that's missing is a 'Clippie' - the only one I could get hold of is a OO gauge figure, but the passengers and driver are HO, so he looks like a chubby Peter Crouch in comparison. So, just like the guy from the 'On the Buses' TV show, he's probably just popped into one of the nearby houses for a bit of you know what...