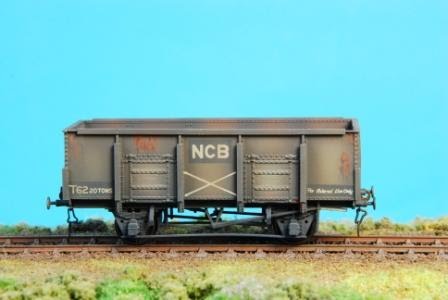 Another evening, another wagon off the production line...
Last night I put the final touches to the latest mineral wagon intended for use on my Maudetown Colliery layout and it marks the first of my National Coal Board internal fleet. Once I've weathered my Hattons/Heljan NCB Class 14, the combo of private owner loco and wagons will make a nice contrast with the BR traffic that also runs into the colliery.

Working on the rolling stock also gives me the rewarding sense that progress is being made on the layout, despite the second baseboard still not progressing from its initial woodwork stage. Magazine projects and an ever-closer book deadline has seen most extra-curricular activities severely curtailed of late, so my layout projects will have to wait for the late autumn/winter period.

Based around a Parkside Dundas kit of a BR 21t (ref.PC03) wagon, itself a progression from a GWR design from the 1930s, this model was based on an ex-LMS rivetted bodied 20t Loco Coal wagon. Using an image from the excellent website of wagon spotter extraordinaire Paul Bartlett,
the bodyshell was modified with various bits of plastic and etched brass rivet strip. 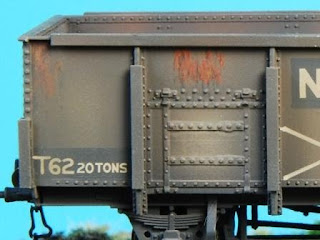 Markings are a mix of Fox Transfers and hand-drawn elements, while the weathering job was built up in various layers to achieve a more authentic patina of rust and coal dust. The building of the model (along with a few others that I'm currently working on) will be described in detail in Model Rail some time in the future, probably early next year. However, the weathering techniques involved will be demonstrated in my next book, more details of which will follow in due course.... 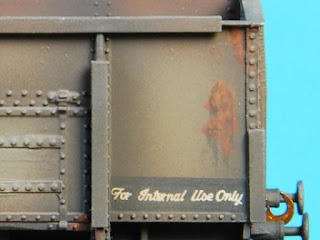 Weathering in several stages, starting before even the basic livery coat is applied, helps to create authentic effects, including subtle shadowing within panel lines and around door frames.