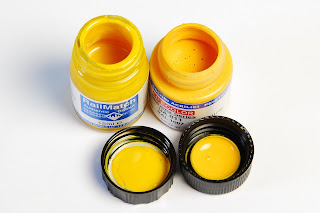 As has been mentioned previously, last year I was enlisted to help with the development of Lifecolor's range of BR livery paints. The modest range of acrylics have proved popular since their release, so much so that modellers have been requesting other colours to broaden the choice available. Choosing just six initial shades was difficult and I think we covered the most popular, save for a representation of warning panel yellow.

However, Alex at The Airbrush Company recently sent me a large box of various shades of yellow from the substantial, existing range of Lifecolor paints, to see if there was a close match for the BR yellow. After much testing, the best of the bunch was UA811/RAL1007 which looks very much like the 1983-1993 shade of warning panel yellow.

The photo above compares it to the Railmatch enamel offering (my usual standard choice). Not a 100% perfect match but, with a tiny drop or two of white mixed in, the Lifecolor paint looks even better. I like to keep to the same formula of paints during any project (save for undercoats and varnishes), so being able to stay with Lifecolor paints throughout my next BR blue or green repaint will be welcome. See The Airbrush Company's website for more details. 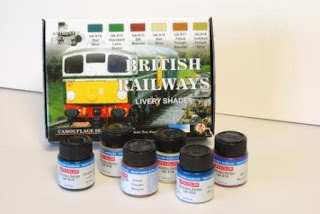