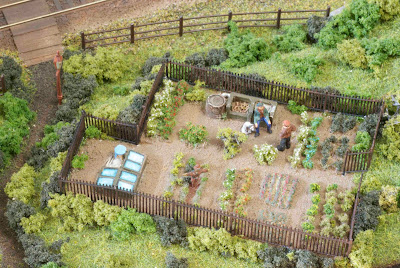 Having been awoken at an un-Godly hour by our poorly dog, I thought I'd spend a few hours putting in a bit of work on my N gauge layout project, concentrating mostly on the small allotment site. The vegetation has received a few final flourishes and some suitable figures have been added. I’d originally ‘planted’ bushes around the perimeter, but with the surrounding land earmarked as grazing pasture, I thought a fence might be more secure against any eager herbivores.

The allotments are created using the various packs of castings from Timecast Models (see a review in Model Rail soon), which are available either pre-finished or unpainted. I’ve used a mix of both, although only the compost bins and cold frames have been left in their supplied painted finish. In order to blend in the four different sections (well, 3 and 3 quarters to be exact), I seated them into a bed of wet plaster, cleaning up the excess and filling the gaps at the same time. 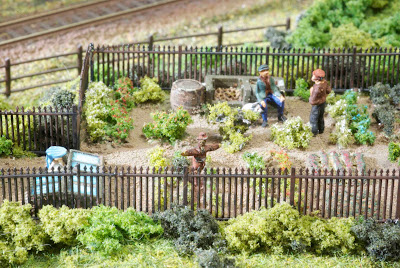 The scarecrow and figures are from Langley Models and, once painted, look pretty good. The dog, by the way, is a 2mm scale version of our own Pepper, the white Collie, and the seated chap is meant to me, as that’s what I do on our real allotment – sit and reflect on what jobs need doing!

When dry, the whole lot was painted with a mix of Tamiya textured acrylic paints that give a highly realistic soil effect. When this too was dry, I painted the raised details to represent various plants and added tiny fragments of Woodland Scenics bushes and foliage to give a better representation of a successful allotment.

Adding blooms to the strawberry beds and fruit trees, plus the squash and courgette plants, using tiny blobs of acrylic paints, adds the finishing touch. It also sets the scene in mid to late summer, which is perfect for this idyllic slice of England around August 1961, somewhere in the West Country. In 2mm scale… I also picked up some useful N gauge stock from the MR office yesterday, including a lovely Farish GWR diesel railcar - just the thing for this tiny layout! 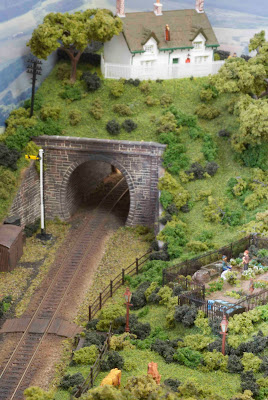 The plots are in a wonderful setting: beside a scenic West Country branchline halt and within spitting distance of a fine hostelry. Just the thing, after a hard day’s graft on the plot… a nice cool glass of Scrumpy! 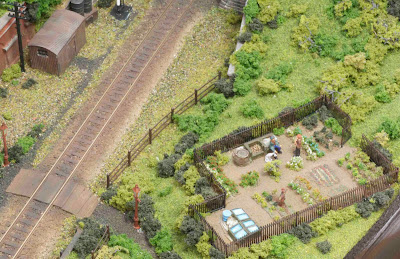