After a weekend of transfer action, two old Airfix kits near completion. 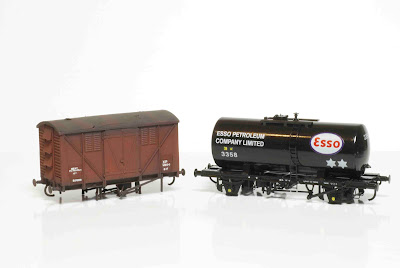 Over the weekend, in between building a vestibule and decorating a hallway, I managed to fit in some work on some rolling stock projects that are to feature in my next book. As I like to work in batches, I've had a variety of models all awaiting their turn in the transfer queue, two of which are the old Airfix kits featured previously on this Blog. The Meat van is quite remarkable as the waterslide decals supplied with this 1980-vintage kit were found to work perfectly. After 32 years, that's quite a feat.

As for the Esso tanker, I didn't bother trying the supplied decals as they had turned an ugly shade of yellow and cracked badly. Happily, Cambridge Custom Transfers produce a lovely pack of waterslides for this iconic kit and they go on a treat.

Both wagons now need sealing varnish coats before final assembly and weathering. The Meat van's scratch-built compensated chassis has had to be partially dismantled as the paint began peeling from one of the soldered joints - a clear sign that I'd missed some flux residue in a awkward corner. But that's what you get for rushing...
Labels: airfix decals kit building OO painting plastic tanks van wagons