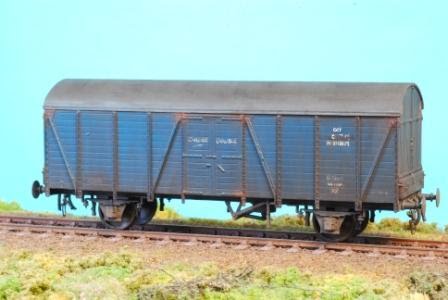 This smart Parkside Dundas kit was built sometime around Summer 2000 but has sat unfinished until last week.


As discussed in the previous posting, I've been working on a Weathering Supertest for Model Rail issue 149 (on sale Oct 7th) and one of the best by-products of this feature has been the chance to weather some of my backlog of built kits and ready-to-run (RTR) stock. While testing new or unfamiliar products carries an element of risk, I've allotted the models according to how confident I've been with each paint or pigment.

Therefore, some of the kit-built vehicles have been reserved for products that I already know well or, at least, have heard positive comments about. In contrast, RTR stuff has been given 'guinea pig' status! Two models of particular note are a pair of ex-LMS CCT vans that I built/modified some years ago and, although they were painted at the time, they never received the weathering jobs that I'd envisaged, instead being packed away in a box for 10 years. Indeed, I can remember building the Parkside 4-wheel van in my wife's office in Liverpool University - come to think of it, we weren't even married then, so it IS a long time ago! 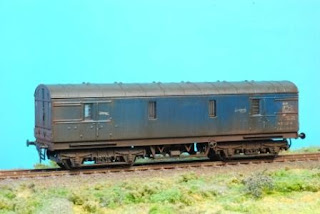 This modified Lima CCT has waited almost as long to be finished. The sides have been 'plated over' during life-extension repairs, but it's still riding on a set of BR bogies instead of the more appropriate LMS units - a set of castings have been ordered...

The modified Lima bogie van was done sometime around 2004 (I think), being inspired by a similar model featured in Rail Express Modeller magazine. However, I've just realised why this particular van had remained only partially finished: the bogies are wrong, so are in need of  replacement with LMS-pattern units. Oh well, I hope it won't be another 6 years before it finally gets signed off ready for service...

Both vans have been weathered with the wipe-on-wipe-off method, the 4-wheel version using Lifecolor acrylics and the bogie van with MIG oil-based washes. Extra track dust and roof dirt were added with MIG and Vallejo weathering powders. 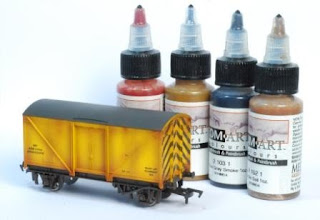