As described a few weeks back, I recently found a box of drawings and research material amassed whilst I was employed at the National Railway Museum in York in the early 2000s. As well as sketchbooks, I also found a big pile of photographs, showing the variety of artefacts that I restored, ranging from signalbox track layout boards, to engineering models, to telephones and station signs.

Most of the artefacts were being taken out of store to enter the then fairly new ‘Warehouse’ area of the museum. This was once a real treasure trove and a great compliment to the Great Hall with its vast locomotives. Indeed, on my first visit to the NRM in 2000, I spent most of the day lost amongst the never-ending racks of items; many of which were small, but interspersed with the odd bigger artefact (like an APT coach).

Most of this was later removed to make way for the enormous and pretty pointless Flaming Scotsman exhibition (minus the real Flying Scotsman, naturally) and I presume it went off to Shildon rather than back into store. However, much of my passion for the museum had been sapped by the time I left in 2003 so I never really paid attention….. 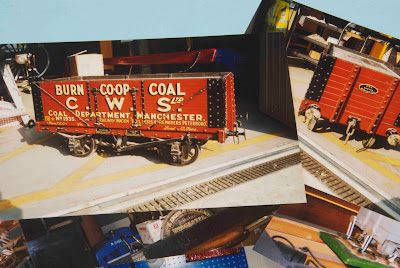 This enormous model coal wagon was built by apprentices and was an exact miniature of the real thing in every way. The brakes even operated in exactly the same way as the prototype. From what I remember, this only needed a clean and re-oil and it was as good as new - testament to the builders in the 1930s. I think it was built as an advertising tool for the Manchester coal merchant, to sit in their head office. And yes, it did weigh a ton - no wonder I've got a bad back these days...!