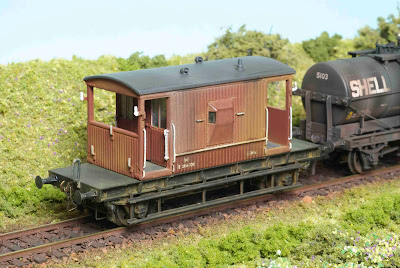 In the latest issue of Model Rail I recount how I recreated a very short 'Jinty'-hauled freight working,  as captured in a photograph taken at Derby in the 1960s. A number of readers have been in touch asking about the modifications to the Bachmann brake van. They are as follows:

The van was based on the preserved E246710, owned by the NRM but on long term loan to the North York Moors Railway. In the early 2000s, I was a volunteer with the p'way gang on the NYMR and travelled on the van a few times and took many photos of it. Therefore, the model was based primarily on these images, plus extra info from the excellent book A Pictorial Review of LNER wagons, Volume 2 by Peter Tatlow - now sadly out of print but probably available via your local library.

A similar conversion was covered briefly way back in December 2005's Model Rail (issue MR86), although the text includes a few errors due to a draft being published rather than the final text - I was ill at the time, as I recall, and there was a mix up in my absence.
Labels: Bachmann BR detailing guards van LNER Model Rail OO wagons