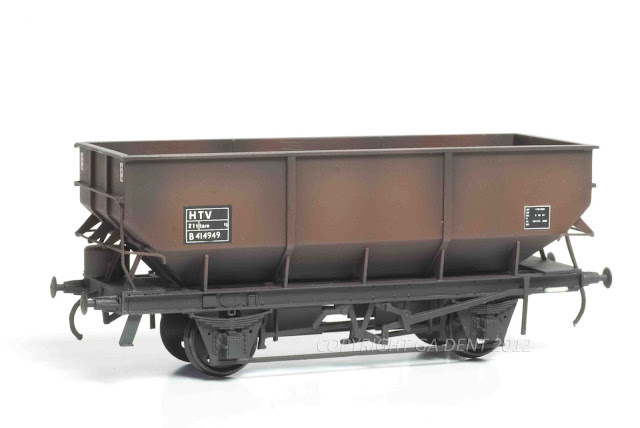 HTV? I remember watching HTV as a kid, usually when I was off school poorly. There used to be some truly awful Welsh language soap operas on in the afternoons. Living near the Welsh border meant we picked up both HTV (the Welsh version of ITV) and S4C (Channel 4). It kind of felt like being abroad. I wonder if these channels are still broadcasting? But I digress...

Just put the finishing touches to this Parkside Dundas kit, the latest coal wagon to leave the Dent workshops and enter traffic on the Welsh Valley-esque Maudetown Colliery circuit. Lettered as a HTV, it's in late 1970s condition and has been a joy to build. I'm pleased with the lightly weathered finish, achieved by pre-shading the undercoat before the bauxite was applied. The underframe was sprayed freehand, without any of that tedious masking business, helping everything to blend together nicely.
Labels: BR coal kit building Maudetown OO painting Parkside plastic wagons weathering