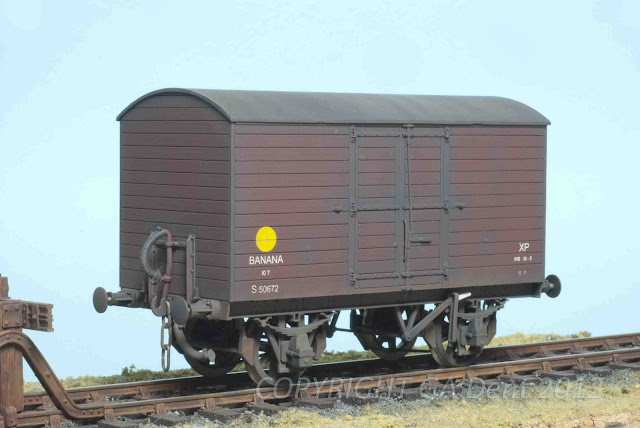 Not a lot of modelling got done over the weekend as much of it was spent at a friend's birthday bash in central London. However, I did get a chance to finally cast my eyes over the revamped St. Pancras station interior for the first time. Is it me or is it a load of cobblers...?
Maybe I'm just getting old, but it just looks like a shopping mall. But maybe that was the point. At least I've got my memories of how things used to be: a dark, atmospheric interior, reeking of diesel fumes, that thrummed to the sound of Peaks, Bed-Pan DMUs and HSTs.

On a less grumbly note, I put the finishing touches to an 'O' gauge SR Banana van last night, built from a Parkside Dundas kit. I've put a lot of effort into the airbrushed weathering of this wagon, keeping my hand in (so to speak) with larger scale techniques. In contrast, I've also got a few 'N' coal wagons to finish and weather next, which will help exercise those muscles around my eyeballs...
Labels: kit building O Parkside plastic van wagons