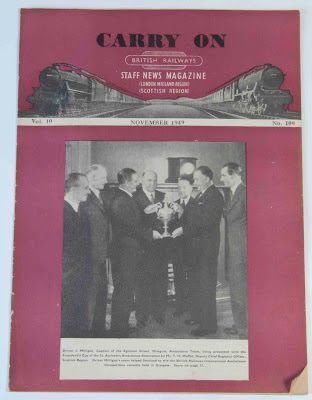 Further to my Blog post over the Jubilee weekend, another old magazine has been unearthed during a mass tidy-up in the Dent Workshop. This time, it's an older issue of the British Railways staff magazine, from November 1949. With a distinctly 'Midland' shade of maroon on the cover and a pair of 'Black 5s' on the masthead, the mag is aimed at staff on the London Midland and Scottish Regions. The cover image depicts Driver Milligan being awarded the President's Cup of the St Andrew's Ambulance Association, in honour of his team's recent win at the International Ambulance competition.

It's always good to read of things like this, when ordinary working men volunteered for activities designed to help their workmates and the general public - on top of all their other duties. There aren't many professions that still encourage a collective spirit these days... 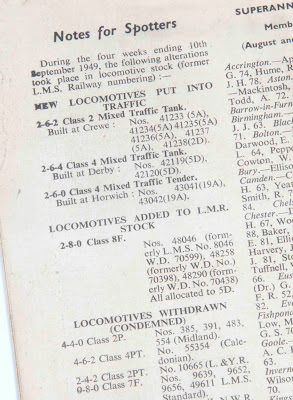 Of perhaps greater interest to us train buffs, is the Notes for Spotters column at the end of the magazine, updating readers of the past month's motive power developments. A half dozen Class 2MT 2-6-2T, plus a pair each of 4MT 2-6-4Ts and 'Horwich Crabs' had just entered service, while a few Class 8Fs had been taken into LMR stock from the War Department.

As for withdrawals, a handful of ex-Midland Railway 2P 4-4-0 and other pre-Grouping designs had been condemned, including 0-8-0 7Fs, L&Y 2-4-2T and a Caledonian 4-6-2T. Curiously, the adjacent column is a list of superannuated former LMS/LMR staff who had also passed into the great Railway Yard in the Sky. All flesh is grass, as they say...
Labels: BR prototype research Steam